Barbara Claire Freeman on “Every Day But Tuesday” 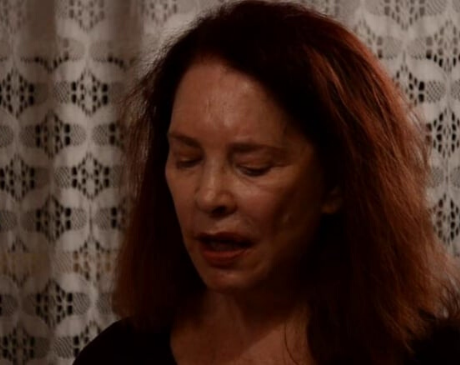 Every Day But Tuesday

It was when a song in the form of a question
meant for anyone who might have taken part
in conversation overheard by strangers
made clear the day before was like today, less
shade aligning fields within an open sky.
If my chronology is right it still could happen—
adolescents skating near a lake realize
the hum they heard more like a quatrain than
a warning antecedent to a message sent
was where the ice grew thinnest, near a present
soon-to-be outsourced. Their voices break
up under pressure, address a speaker
rather than speak through her—have you missed
a second, two or twenty thousand
ways to measure those who see themselves
twinned by shadows painted near a manmade lake.
That was when whole days went drifting,
blackouts served as an example, bells hidden
under pavement crowned with weeds derived
power from each failure: why not let the kids
believe quiet comes from multiplying questions,
alter headlights in a glare that only happens once.
Strangers made more strange by waiting
hear one too many versions of a theme
put in motion as the drone begins it is
the blue and crimson coloring the bronze,
maybe a bomb threat or a demonstration,
doesn't matter how long sound takes to travel
while helicopters illuminate the fences
bordering the lake. Tones deepen,
icons on this evening's news repeat
that opalescent streaks across the sky touched ice.
No one expects a fist closed in defiance
although some parts may yet go on for years.

Begin a sequence every time alarms resound,
this is tomorrow and the sun
seems certain as horizons, day creeps down
where lakes divide one body from another
green hills open, subordinates
watch afternoon become a night-child
shuttling back from private space
to public damage, how else could it happen—
separate lines cross grids that never quite appear
within these memories of lived election: the pond,
lagoon, more empty billboards resting
or displacing sixty watts twelve chords away.
It might be June on Sunday centuries before
the next trimester, each term's a sentence
during leap-year families extend
connections no one asks how many different
systems make nearly perfect figure-eights
wherever ice holds doors click shut,
light replaces dusk the skaters morning in.

From Every Day But Tuesday (Omnidawn, 2015). All rights reserved. Reprinted with the permission of the author.

On "Every Day But Tuesday"

The title comes from teaching a poetry workshop at UC Berkeley during the Occupy movement. The class met late on Tuesday afternoons and its beginning coincided with the arrival of media helicopters circling and re-circling overhead, hosing the campus in spotlights to be televised on the nightly news. Their incessant hovering and shrill, mechanical drone filled the classroom and became part of the conversation. We discussed how a poem might embody and transmit the power of that sound, as well as communicate something of its personal and social significance.

The poem was written years later, but its genesis comes from hearing the helicopters' repetitive whine. Strangely, the sound had metaphorized into what, for me, became the poem's central image: that of adolescent skating on an icy lake. It was as if the figure of the circling helicopters' had turned into frozen water, and their drone was now the sound of "the kids" skating in circles on the ice. I hope "Every Day But Tuesday" suggests the possibility of quiet even in the midst of turbulence, media frenzy, and collective unrest, and might celebrate poetry's capacity for creating it: "Why not let the kids / believe quiet comes from multiplying questions, / alter headlights in a glare that only happens once?" Its syntax is choppy and every line seems on the verge of breaking up or merging into another, but there's a sustained, unbroken rhythm: the poem keeps moving forward and its cadence doesn't change. "Every Day But Tuesday" doesn't propose an opposition between activism and aesthetics but rather testifies to their interconnection. Hear it as unteachable moment, the rhythm of that listening coming and going from my body to yours, and outward to the body politic.