Home > Features > In Their Own Words > Beth Bachmann on “wild” 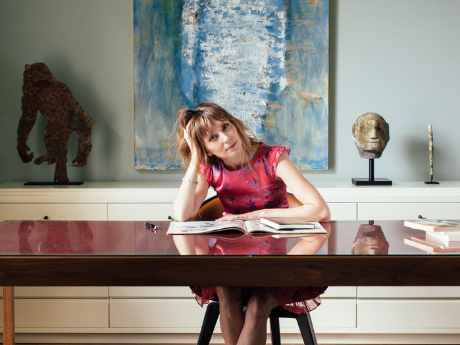 Jar my mouth with your finger – petal

nest for the unborn bee after the mother is gone – darkly

burrow in what she laid

the shape with blood – break it apart – one soldier locked to another:

one living, one dead. I said to the god,

I want you inside of me everywhere at once.

The god said, I want all the power taken back

and forth.
Your fingers are iron.
I know.

From Do Not Rise (University of Pittsburgh Press, 2015). All rights reserved. Reprinted with the permission of the author.

"Wild" began with two deer fighting to breed. Sometimes, deer lock antlers during a fight and being stuck truly together, head to head, die of starvation.

Do Not Rise is a book about survivors of massive, violent loss.

I was staring at these deer – one living, one dead – when I experienced my first (maybe only) ecstatic trance. A warm, invulnerable feeling.

I was writing a book about soldiers and post-traumatic stress, but thinking about my sister's murder. I was thinking, too, about the comfort of army buddies – the peace that comes when you're with someone who's seen what you've seen, the silence of knowing that lets you get on with the stuff of living.

Then, I was pregnant and looking at a picture of petal nests. They're these fragile things a rare kind of bee makes. The mother makes this beautiful, delicate nest out of flowers, seals nectar and the egg inside with mud, and then buries it in the ground and abandons it. This is not why bees are now historically dying.

I sent a picture of one to my buddy, while he was on a train home to his family. My buddy also walks around with a dead deer stuck to his head. It's been a long time. Not everyone can see it.

The poem ends with the three things God is: omnipresent, omnipotent and omniscient.

The poem is a sort of a prayer to keep the wild wild. To keep God untamed, unnamed and everywhere.

Do Not Rise
(University of Pittsburgh Press, 2015)