Home > Features > In Their Own Words > Claire Wahmanholm on “Advent” 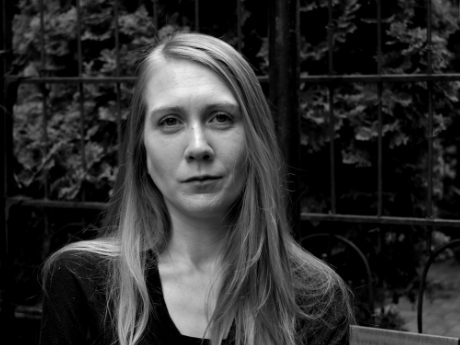 In the first month of the year
birds curdled the air.

From our windows we watched them
clench and billow, their wings beating
so low to the ground that seeds rose
from their furrows.

When our ears began to ache from the pressure,
we sent out our augurs.

A great fire, they said,
is blowing from the east.

This explained the fevers, the mercury
that broke the levees of our mouths,
the apples that dimpled and rotted
in our orchards, dropping through the leaves
like heart-sized hailstones.

Behind our windows, we waited for the fire to turn
even as we watched the horizon
go red from edge to edge.

Every morning new packs of animals fled
through our orchards. Every morning
new apples dropped into the hollows
of their tracks.

We watched our windows warp and crack,
thought of our daughters' hot foreheads,
of the fevers we knew would climb and climb
without breaking.

We were out of songs to hum. Our throats were boxes
of soot. In our orchards, no more insect thrum,
no swallow quaver.

How did we dare have children we couldn't save?

If we closed our eyes, the falling apples
sounded like heavy rain.

From Wilder (Milkweed, 2018). All rights reserved. Reprinted with permission of the author.

I wrote this poem on inauguration day 2017—about a month after the actual Advent season. The poem isn't necessarily about the holiday itself, though it is laden with a sense of waiting (or, if I'm honest, dread).

In the months between the election and the inauguration, I remember a sense of bewilderment—a lot of disbelief and denial, a lot of people predicting that the whole presidency would fall apart before any "serious" damage could be done. We were wrong, of course, but there was still a very tangible sense that there might be some kind of intervention, that we shouldn't give ourselves completely over to panic.

But my own conception of the future was complicated by the birth of my daughter a couple weeks earlier, right around Christmas. It was profoundly surreal to carry a child for many months, picturing the world I was going to deliver her into, only to find out relatively late in the game that it wasn't going to be that kind of world at all. The weaving together of grief and delight, the feeling of simultaneous apocalypse and nativity, was (still is) disorienting. And of course the ambivalence surrounding having children at all is very real to me.

Since Advent is centrally concerned with the Second Coming, it was hard not to have Yeats on my mind. The birds in "Advent" are probably descended from his "indignant desert birds," though I think his survive the poem while mine do not.

The final image can be either poignant or pathetic or terrifying, depending on how bitter you're feeling—the idea that we're so desperate for some sort of salvation that we'll see it anywhere, even in the disaster itself, even as the noose of catastrophe tightens from the horizon, to the orchard, to the windows, to the daughter's forehead, to the speaker's throat.