Home > Features > In Their Own Words > Geoffrey Hilsabeck on “Riddle 6” 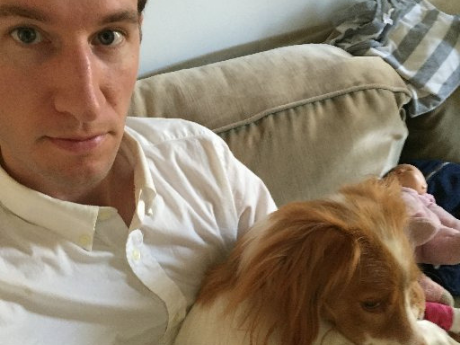 It's as gray as a newspaper
as full of music

When I'm busy about the rooms
it's secret portable

the cages closed and locked
It's an empire for an emperor

The facility is sanitary
An air conditioner is in the room

restrained stripped secured with Mylar
torn through the screaming darkness

I take its pulse nope
listen for a heartbeat it's heartless

From Riddles, Etc. (The Song Cave, 2017). All rights reserved. Reprinted with the permission of the author.

This poem began as I assume all poems do: with a gift. The gift in this case was a stone, smaller than my palm, which my two-year-old daughter, Esther, picked up in the parking lot of her school. (She's now three-and-a-half, and my pockets are still filled with stones, leaves, dried flowers, and other of the world's ephemera.)

A gift and a change: I had just left a job teaching English at a boarding school. For five years I had taught, coached, supervised, and counseled six days a week and most nights and weekends too, writing only in the pinched space of the early, early morning. I quit that job, moved south, and all of a sudden had four hours every day to write, or overwrite—that's what the time bought me, space to make mistakes, take wrong turns, follow intuitions all the way to their often absurd, misguided ends. It was in that open space that I found myself talking to the stone that Esther had given me for safekeeping.

Talking to a stone, though—it seemed too dated and, frankly, silly a gesture, especially for a poem concerned with the war on terror and the ways that war has come back home. So I shifted the poem out of direct address and made it into a riddle. I had been writing riddles since discovering the Exeter Book and its 94 riddles, most of them about everyday objects, several months earlier, and a stone struck me as an obvious subject.

Into this riddle form went lines from an erasure I had made of the Senate Intelligence Committee's report on torture, riffs on poems by my favorite postwar Polish poets, pet names for my wife and daughter, material from the Guardian's "The Counted" column, which tallies and briefly details every death in this country at the hands of the police. (That last source was cut out of the poem at a late stage of revision, but I still hear a faint echo of it in the way the open, unaccented "the crowd is dispersed" gets sealed up with the strictly iambic "the cages closed and locked.")

Something else went in there too, the spoon stirring the soup, the spirit-spine of the thing: not a word or an image but a peculiar music carrying the poem forward. "Riddle" is herky-jerky, not within lines but across them: it herks for a stanza or two then jerks. The poem is held together largely by the thing at its center, the answer to the riddle. Rosalind, the hero of Shakespeare's As You Like It, coexists with sentences taken verbatim from the torture report. Calais, a town in France that is, here, an oblique reference to the refugee crisis, keeps company with my daughter. As in life, these unrelated things butt up against each other and hear secret harmonies.

The poem's disjunctions are its strength. I see that now; I didn't at the time. Had I, I might have gone further, trusting the form to provide all the centrifugal force the poem needed and so let it spin further outward. Part of me wishes that I had better honored the original music—those herks and jerks—even as I tried in revision to make some sense out of my ravings and achieve thematic and formal coherence. But no, the poem exists.

Here is the book, the poem says at the end, slipping back into direct address. It doesn't hold a book, though, but a stone, the one my daughter gave me. The stone says love. This ending felt at first like a compromise, something not achieved but fallen into. Were those imperatives hardwon enough? But now, the poem in print, Harvey Weinstein and Bill O'Reilly in the news, protestors and bystanders hooded and booked, the world either on fire or underwater, I feel more charitable toward my ending.

I see now that the poem is and always has been addressed to my daughter. Love what's approaching, it tells her. But preserve your independence. There is real danger—and honor, if the word isn't too antiquated— in the imperceptible space between those, the breath that separates them. Try to live there, will you, oyster?