Jasper Bernes's “We Are Nothing and So Can You” 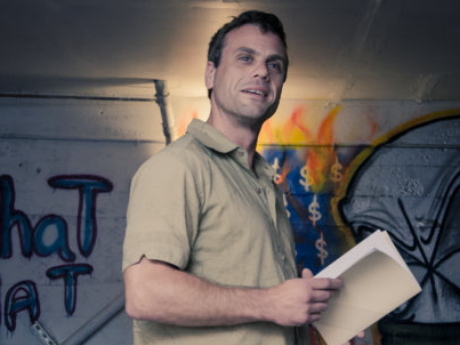 We Are Nothing and So Can You (an excerpt)

By summer's end, we learn much later, no one could agree about when the disturbances began. A dozen years ago, last year, earlier this month: visitors to that part of the city were likely to hear a different answer each time they asked. Anti-riot agents coated every surface of the zone, dulling the green of the trees; the sharp sweet smell of the gas residue was the first thing you noticed once you crossed the river, and some residents suspected these chemicals were the cause of their newfound incapacity with time. In the cafés, impromptu philosophers sat among the shattered tables and chairs, debating whether calendar time even applied in the zone. The riots were rather like the lunar rhythm of the tides, they said, or the layering of weather on weather that formed a climate, spreading through the interconnected neighborhoods as heat diffuses through a block of metal. Indeterminacy in time was offset, however, by the fixed position of the zone in space, skewered by the pushpins stuck in a hundred police maps. Walk a couple of miles in any direction and the calm was absolute—more terrifying, by contrast, than the worst night of wooden bullets and water cannons: the curbs shining with brightly painted color coding, the asphalt as smooth and lineless as a baby's face, affable citizens queuing up in front of the cupcakeries, shaking hands as they greeted the bland regularity of another day. And it was not just the immediate environs: large parts of the country seemed pacified, docile, bright and crimeless and tediously polite. The radius of pacification was spreading day by day, as the national newspapers reported. There were theories, of course, that the rioters were simply the nocturnal avatars of well-behaved citizens from beyond the zone, but none of the photographs could match faces with existing records. Some suspected that deviants from other parts of the country were being deposited in the zone; there were rumors about secret flights, nocturnal renditions, people with cloth sacks over their heads being marched across the bridge. If this were true, the government put up a good show. Entire universities were devoted to studying the phenomenon, developing new weapons and police tactics. Clergy descended on the zone; billions of dollars were funneled into non-profits to address the sources of the disturbance; governmental panels met continuously for the better part of a year, a decade, a century. But then one afternoon toward twilight, while the drones congregated above the river, an elderly man came out from the apartment blocks and, instead of beginning to gather the loose rocks and bricks into a pile, lay down among the debris and went to sleep. Soon another old man came out and he lay down as well. Eventually, the whole neighborhood was there, in the street, parents and grandparents, friends and cousins, lying together in a big pile as if they had expired happily. Nothing happened that night in the zone, nothing was lit on fire, nothing smashed into little pieces; there were no angry declamations, no projectiles. The zone was the calm eye of a storm whose scale was orders of magnitude larger: for thousands of miles in all directions, city after city swept up in the outcry.


From We Are Nothing and So Can You (Commune Editions, 2015). All rights reserved. Reprinted with the permission of the author.

On an excerpt from "We Are Nothing and So Can You"

I wrote this section in my final year of work on We Are Nothing and So Can You, around the time of the first wave of riots in Ferguson (August 2014). I was hugely inspired by the determination and consistency of the people out in the streets there. Whereas other popular eruptions in response to anti-black police murder would often dissipate after a few days, the people in Ferguson kept coming out, night after night, for weeks. This seemed an example of the kind of endurance and pertinacity that we would need in order to convert momentary revolt into the long, open-ended metamorphosis of revolution. At the same time, the events in Ferguson were geographically isolated, and somewhat small by the scale of such things. The unrest didn't really generalize in those first few weeks, as eventually happened in November and December, once the outcry in response to the non-indictment of Darren Wilson merged with the response to the murder of Eric Garner to form a continental movement. Duration, qualitative intensity, spatial extension—we might think of these terms as the three dimensions in which social movements propagate: broad where long-lasting, long where geographically extensive, tall where ferocious and destructive. These terms (or their cognates) are important for poetry as well. Duration, in particular, is a hallmark of the modern long poem as it emerges from the inheritance of epic: our treks through Pound's encyclopedic Cantos or the exhaustive plenum of Midwinter Day derive from the decade-long wandering of Odysseus, the Italian expedition of Aeneas, the infernal descent of Dante. We Are Nothing and So Can You is a long poem, and perhaps takes something from the epic, but it doesn't provide duration of the sort one finds in the classical epic: a sequential, cumulative temporality that accretes around a single hero. For that reason, the section begins with a scrambled temporality: a present whose pastlessness is only visible from a future vantage. I often experiment with time and with verb tense and mood in the poem, writing in what Anne Boyer has called the "future-subjunctive-past-perfect tense." Perhaps, then, what I'm exploring in this section is a kind of duration produced through the lengthening of a single occurrence rather than the accumulation of instants, a momentary intensity raised to the level of history.