Home > Features > In Their Own Words > Kyle Dargan on “Fool's Therapy” 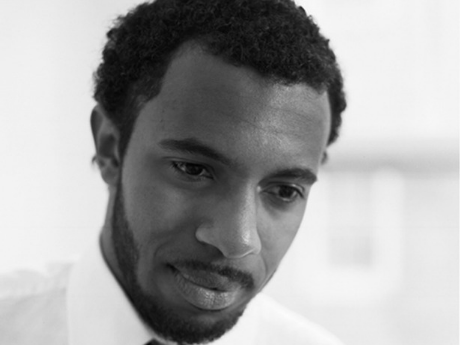 for Rob and other dead "Bees"


Robert Peace is dead. Those words, writing them,
should assuage something. They do not—
they say nothing of his gruff brilliance, nor lure
my mind to parse the syntax of his passing.

I still envy the ease with which Peace untangled
derivatives—he helped me feel the relief
of not being the smartest head in the classroom
(a grace that serves any fool well in later life).

Still, Peace could also say the droll things
that needed saying, as he did during religion class
—his eyes absent, off reading through the window
what awaited us beyond senior year, beyond Newark.

He opined, "Beyoncé is so fine I'd drink her bath water."
His hyperbole turned my stomach—recalling too well
what I'd learned of the body and what it secretes,
knowing too little of lust. What was it then

not acts of love.) I inflate my basketball
the day after I learn Peace has been shot, has died.
I walk onto a giving plane of hardwood
and flick three-pointers at the hoop—not in love

with the world, just wanting it to grant me
simple pleasure, the release of releasing
the ball from my fingertips. No teenager,
my knees now burn with each leap and drift,

but at least I can predict what follows here.
Peace is dead. I please myself with shooting jumpers.
Sneaker-squeak, tap of landing, swish of contact—
the sequence a sonic salve. I don't love the world

in this moment. I do as Father Matthew taught us.


From Honest Engine (University of Georgia Press, 2015). All rights reserved. Reprinted with the permission of the author.

As I mention in the author's note for Honest Engine, I wrote this book while wading through a torrent of bereavement that started with my grandmother's passing and ending with my college roommate being negligently run over by vehicles involved in a police chase. One of the deaths occurring between those points was that of Robert Peace, my friend and high school classmate (a fellow St. Benedict's gray bee) who was shot and killed in a home invasion—that same house being one that my mother and father lived in when I was very young.

Eventually, one becomes—either as a psychological fail-safe or simple breakdown—numb to the repeated experience of loss. I had no plans nor desire to write about Peace's death. It's a hard story to stomach, as the title of Jeff Hobbs' recent book—The Short and Tragic Life of Robert Peace—suggests. Nevertheless, I firmly believe that I am the kind of writer that lives his way into writing. If I do (particularly when I don't have desire to do anything), the doing will lead me into writing what is urgent.

So this poem actual began where it ends—with me going to the basketball court to put up jump shots as a means of grieving, or eluding grief. I remember saying to myself, while shooting, "Rob's dead"—focusing on the shot and simultaneously scrutinizing the fatality, hoping some assuaging significance would reveal itself. And when it would not, I had to accept that all I had in the moment was the pleasing distraction of shooting the ball. "This is a somewhat masturbatory act," I thought to myself, and then my associative poetry brain engaged. I remembered Fr. Matthew's lectures on love and sex. I remember sitting with Peace in religion class. I remembered how casually genius Peace was and how out of place it also seemed in this city where people expected so little of brown boys.

None of all that makes "sense"—and the poem does not to attempt to find sense but rather act out the processes of beginning to feel how all those parts touch and abut each other. In the end, that's all there is—process. It's me shooting jump shots as an unlikely reinterpretation of what Fr. Matthew tried to impress upon Peace and I. It's a mess . . . but a mess in motion—and somehow more honest or emotionally direct than the idea of meaning.