Home > Features > In Their Own Words > Lisa Lubasch's "The Situation/Evidence" 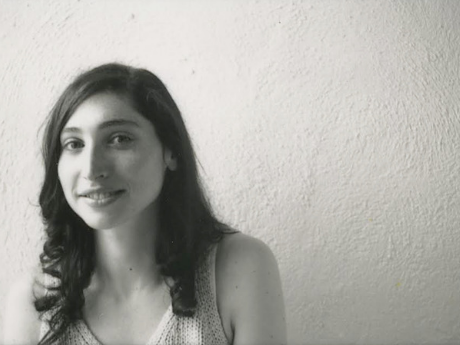 Open hangs his head and begins to mumble.
I am not quite at that point, but in a moment I could be mumbling too.
I notice three things about this place.
The first is that Open inhabits it.
The second thing I notice is that I—I—
The third thing develops as the light moves down the tumbling place. . . .
The tumbling place is my name for—
One of the things that tumbles into the tumbling place is our—
Believe me or not, we have been held up here for hours.
At least three hours I would estimate, yes.
Three hours begins to seem like a lot more hours when you have no provisions or sealed medications.
Provisions and sealed medications were promised us, from the outset.
From the outset Open was skeptical. He said, Cheat (that is my name), he said, Cheat, we got no time to do this.
By this Open meant travel on the sly.
I might have agreed with Open, had my mother, Amelia, not decided it was time to remove my favorite white chemise from the little banister on which it had been hanging since my adolescence.
Into the garbage it went.
Or perhaps not the garbage but the garden.
I have still not recovered from the loss of Chemie to the garden.
Chemie, my chemise.
Three hours ago Open and I were in much better shape.
Open is mumbling with his head hanging down.
I decide not to bother him.
With my arms hanging low I struggle in my bondage suit through the white crackle of the evening.
Who knows where I am going, and why the evening is white.
I arrive at a tree and I rest.
I can see Open in the distance, his head hanging low, his bondage suit making it tough for him to follow me.
I wouldn't have wanted him to follow me, even if he could have. I am ripe for a bit of solitude, the white crackle of the pine cones, that sort of thing.
I suppose Amelia is looking for me by now, I suppose she has been wondering where I've disappeared to, and why.
I bet she regrets ever dumping my chemise.
From this angle I can see Open. I can see his long thick persecuted stare, heavy as a humpback's, trailing off through the distance.
I can see him pushing out against his bondage suit.
I also want to push out against my bondage suit.
I want to push out and I am in a slightly better position than Open to do this.
For one thing my head isn't hanging yet.
That's because my medications are still working, while Open's medications are not.
It's evident, one, from the hanging of his head, and two, from the way he is spastically pushing out against his bondage suit, accomplishing nothing.
I feel sorry for Open, but I know I'm going to be in a similar position if provisions and medications do not arrive soon.
From my position at the tree I say a short prayer.
O Lord, forgive me.
What I know is the levers on my spine have not reached nearly as serious an angle as the levers on Open's spine.
The levers, which are possibly responsible for his mumbling?
I give a little start. It is not a big start but a little start. Just enough of a start to be appropriate to the level of the pain that arrives in my right side, like the poking of a carapace.
What I need now is a little paregoric.
But do I get a little paregoric?
No, I do not get a little paregoric, obviously, because the medications that should have arrived three hours ago are still not here, not as they were promised us.
I shout across the distance to Open.
Nothing, no response, just as I expected.
I am assuming Open is a goner. The levers on his spine are forcing him into a dreadful low position.
Do I have regrets?
Maybe.
Do I have dreams past?
And yet, even with the tumbling place in my line of sight, even with Open struggling on the sectioned landing just before the tumbling place, I refuse to give in to the hopelessness of the situation.
I have this situation, and no other. . . .

What will change? What do I observe?

Crisis gives rise to opening. One is never "after" it. ("Over it.") One is "inside." Opening

Can I tell you something?

One is "open to suggestion." Open the window.
One is left. One is so open that one's but what
is coming out ("from the inside")

Can I tell you if I want to? Yes will you open? Will you act with me to argue the offense? Out into the open

I am open to it all. I see summer as I see I see daylight I see
daylight as I see clobber. I see further than I could see