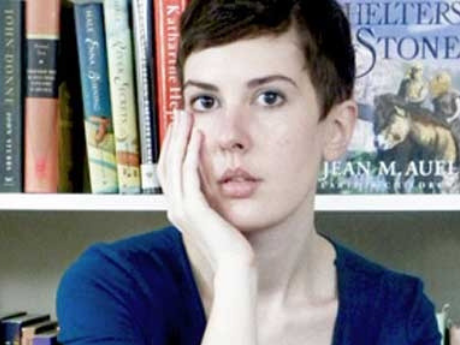 They are indigenous in me, says Old green America.

The law says go west, and pick a plot of land, and build

an 8x10 house under shade of my law, and live there,

and the title of the land will stream into your fingers.

The country is still so new, the states must draw themselves

every morning, all real and future and possible states

draw themselves over the land. "This country is infested

with states," say the settlers, "they crawl on their bellies

through the mud, have learned to look like their surroundings,

eat other states and their own young. They suffer like spiders

from ingrown silk; their backs are marked with one white star."


We were counterfeiters before and have paper left over,

so we turn all our eyes to the west. The law never grew

so we draw plans for 8x10 inch houses. We'll paint them

miniature white, and pose with one boot on the roof,

and wait for our land to come rolling in;


yet somehow our plans are never finished, a new west wall

always wants to be added, each window wants a confetti bush.

We draw deeper and deeper into the house, the house grows

over with flourishes. Before too long we add people: inside

pours through the glass and fractions of seconds tick by.

Inside the people are dots, they eat fictional inches added

to fish, they stumble outside every morning and haul small

reflections up from their wells. All pigs there are in-pig

which is to say pregnant, and their trapdoor spiders fall

through themselves. The wife soothes the cow as it makes

a copy, and skims cream-colored stationery off her milk.

When she wants a flock of chickens, her children all outline

their hands, and a flock of chickens appears. When she wants

to kill one, she sets it loose

and it runs itself to death

on the family piano: it plays high to low and low to high

and then races up and past the keyboard and keeps

playing for a moment in the air—even shapes

of chickens don't know when they're dead.


It's the year of smallest statehood, the people lie down

on the floor to sleep, the states sneak in through any crack

and draw faithfully around them while they dream, draw

North on one and South on the other, and then the states

crawl into their mouths and draw where they will wake up

tomorrow, and stand with one state

in each foot of you,

laughing, and North wakes and sees that South has been bitten,

and she bends down and sucks the green boundary out.

The truth is I had gotten obsessed with Laura Ingalls Wilder books. Why are these considered girls' books? People are building log cabins! They're digging wells! They're getting chased by panthers and dying of starvation and eating the curliest part of the pig, the tail! They're sucking horehound, the most lawless candy! Territories are declaring statehood. People are waking up in the Dakotas at last.

Not that I knew where the Dakotas were. They were square as hell, I believed, and one of them contained something called "De Smet," but that was it. My education had failed me. I had learned the fifty states and their capitals with a "Capitals Rap" in fourth grade and now none of the Capitals Rap remained. (This was back in 1992, in those happy, heady days when we believed a rap could teach a child anything.) I listed all the states I knew. There were about ten. Rhode Island was NOT one of them. "Whatever. This is a poem," I told myself encouragingly. "I'll just make it about—the states when they were just starting to happen, when no one else could list them either. The little claims and the big territories and the suddenly solid states."

I couldn't think about the land so I thought about the map. The book I was writing was about drawing, cartoons, ink, paper. Ink seemed very alive to me at that time; it seemed to have more agency than it ever did before or after; it seemed to be free and full of direction. I thought of boundaries chasing themselves westward. I read about a settler who built a tiny, tiny house on his claim to get around the requirement that he build a home on the land. It was a dollhouse, really. There was a picture of him standing next to it with his boot on the roof; the house was about the size of a sheet of paper. The man was grinning because he had read deep into the law and outwitted it. He looked like way more of an American than I had EVER looked, even in those pictures of me wearing my Bart Simpson shirt at the Grand Canyon.

With his hair like the outline of a hand!

I imagined a small pioneer life in the dollhouse—little book things happening in something just about the size and the shape of a book, little fictions walking back and forth, drinking miniature water in miniature sunlight, while big purposeful black lines raced over the land outside, past the windows and under the floorboards, so fast they almost made a sound.