Home > Features > In Their Own Words > Paul Tran on “Copernicus” 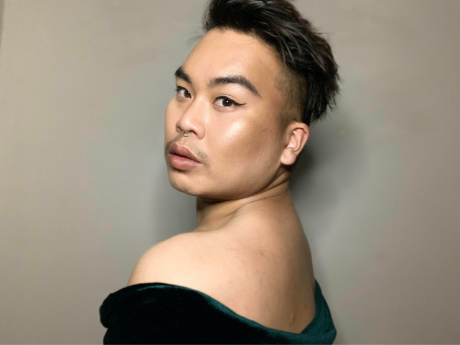 to reveal another inch of thigh
before the face of faith?

I once didn’t. I once thought I was
my own geometry,
my own geocentric planet

spinning like a ballerina, alone
at the center of the universe, at the command of a god
opening my music box
with his dirty mouth. He said

Let there be light—
And I thought I was the light.

I was a man’s failed imagination.

Not stars.
Not whatever I want.

Reprinted from All the Flowers Kneeling (Penguin, 2022). Copyright © by Paul Tran. Reprinted with the permission of the author.

The poems in my debut collection, All the Flowers Kneeling, emerge from a quest to discover new knowledge about my experience as a rape survivor. In “Copernicus,” the penultimate poem, I open with a question about the relationship between doubt and faith. To me, they are lovers trapped in a pattern of seduction. One undresses before the other. One watches the other undress. One is active. One is passive. One relinquishes adornments. One remains inscrutable.

To say I am a poet of discovery, of inquiry and investigation, is to say I am a poet of doubt. I doubt received ideas, commonplace values and rituals, the status quo. How else could I have outsmarted my circumstances, and avenged myself against them, to claim who I am today? If I had believed the lies about myself, about the people and places and things I love, then I would have never learned to think for myself. I would have forfeited my freedom, my imagination and my voice.

Yet, for many moons, that was precisely what I did: I believed the lie that my suffering made me special. I acted as if I was “alone / at the center of the universe”—unoriginally gluttonous, relentless, cruel—and thought that exceptionalism would make me loved, and love would redeem all that happened to me and all I was responsible for. I thought this was true because I needed it to be true, because I lacked the creativity to devise an alternative and the courage, as well as integrity, to admit I was wrong.

In “Copernicus,” I admitted I was wrong. “I was a man’s failed imagination.” And I was my own. Writing this poem made me realize I had wanted everything to revolve around me because I was spinning out of control. The poem taught me that I had to free myself of my investment in being the victim and the victor. Instead, I had to be doubt and faith. At once both lovers, I had to finally perceive myself and let myself be perceived honestly. I discovered that if I wanted the truth, I had to change what I wanted.