Home > Features > In Their Own Words > Rachel B. Glaser on “The World of Manet”

Rachel B. Glaser on “The World of Manet” 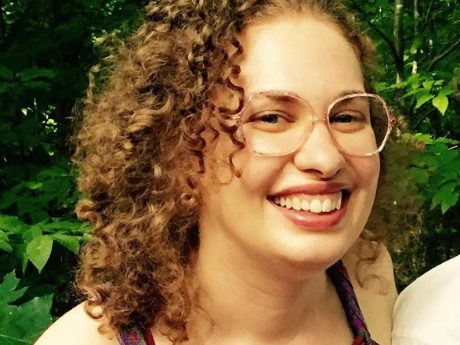 The World of Manet

I left the books in Brooklyn
there was one about Titian too, and another I can't remember
never getting to cull them for phrases like I'd like to
plus can't find the draft, which I scrawled on the back of a poem I was going to read
and then did read at Berl's

I just walked back into the dark hotel room where John is sleeping
and he asked "who is it?"
as he often asks while he's asleep


From Hairdo (Song Cave, 2017). All rights reserved. Reprinted with the permission of the author.

On "The World of Manet"

In some of my new poems I've been playing with the idea of audience. Am I talking to myself or to strangers? Both. I'm talking to myself, but letting strangers listen, and I'm talking to strangers, though maybe also to my future self. I find it interesting that we talk to ourselves all day, often without words. A mess of thoughts bounce around our minds, and it pleases me how writing or speaking can untangle a thought from the noise.

Sometimes, I'll sense a poetic awareness of my current state. Whatever is happening to me, or whatever I'm thinking, wherever I'm standing, will seem like content for a poem. It's a pleasant feeling. I become more interested in living, seeing, and thinking. Sometimes it feels similar to being high. Sometimes it leads to an actual poem.

In this case, I was walking to the train in Hastings-On-Hudson, when I saw a big TV in a window and was able to tell that it was playing Meet Joe Black, though I've never seen that movie. That interested me, and then right after, I walked past a box of old books on the sidewalk. I didn't need any old books. I didn't want to lug around any extra weight. There wasn't any room in my backpack. But a few steps later, I was wondering if I should turn around. I started writing a poem in my head, about a person paralyzed, unsure if they should turn around to check out old books. This unborn poem made me turn around to check out the books, to get deeper into the poem, and I was rewarded with free art books.

On the train, I wrote down some lines about the books and my mini-adventure, and everything a stranger said excited me, and seemed like potential lines for the poem. A brand new, mostly unwritten poem, can be a powerful thing. It hasn't disappointed you yet. It doesn't have definite qualities. Days later, when I couldn't find the draft, this unfinished poem seemed even greater in my memory. Since I couldn't find it, I could assume it was the best poem I'd ever written (!) and never know if I was wrong. I decided that being unable to find the poem was an invitation to write another kind of poem and started a draft.

Days after that, I was revising it in a hotel in Key West, and my current surroundings and concerns got sucked into the poem. The poem is a place to talk to. It's a way to tell myself what's going on. Typing into a gmail draft on my iPad felt like speaking to my poet friends I was about to send the poem to. Referring to the old draft, the art book title, and the readers of the poem, seemed to twist some of my feelings and facts into something more meta and epic. I liked the idea of future readers and that I could impart any message to them, and I especially liked the idea that my urgent message to them to "paint today," might send them off into a new art adventure of their own, multiplying the "poetic awareness", giving them a vision of an unborn painting that might march them over to that watercolor set some cousin had re-gifted them.

"Matisse didn't paint until he was 50!" I often tell non-painting friends as encouragement. Well, I just wikipediaed that, and it is not true. But this is: In 1887 he went to Paris to study law. He first started to paint in 1889, after his mother brought him art supplies during a period of convalescence following an attack of appendicitis. He discovered "a kind of paradise" as he later described it, and decided to become an artist, deeply disappointing his father.

What a great story! I want to somehow work it into the poem… Now I'm seeing a poem as a snowball, rolling down the hill, picking up details, and nonsense, and confidence, and grass, and stones, and dirt and things.