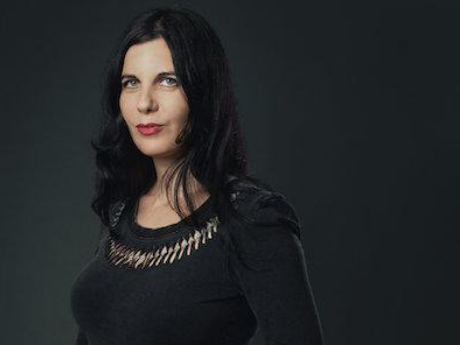 at McDonalds where there are no black people
and there's a multiple choice question
or white people about Don Quixote
or Asian or Indian people I don't want to be around
people I want to be here where there is
free wireless I do not want to sit at the Christian
coffee shop nor the public
library No I want religion to blow itself up
My sister converted to Catholicism
I do not want to sit at Starbucks
I like McDonalds coffee because it is cheap
and watery I like how it tastes
I like this table where the old man
is telling his old friend
about the baby black swan that he would feed
corn to in Cairo, Georgia when he was a kid
No, Mark Twain did not write Don Quixote I'm going to
be here a while in this fucked up shit
You can get an old Crown Vic police car
In Cairo for $500 so I read
a poem by James Franco
in the literary magazine I brought with me
My mechanic wants to fuck me
and the poem isn't as bad
as people say he is bad One of his friends dies
in the poem He uses the word "cunt" I don't know
what to make of it I read it as "Cnut"
the medieval prince of Denmark who ascended and ascended
to become the king of England I bet some managers here could relate
to Cnut Send me a pic of your
cunt the mechanic says I miss you I say what do
you miss about me He says "your big tits"
Elliott Smith is mentioned in
the Franco poem and might or might not
be a "cowboy" Maybe Franco really
is bad after all The Crown Vic is
a vehicle the way the police always
say "vehicle" not "car" but the mechanic
always says "car" not "vehicle" because I teach
the police I know how they talk The mechanic
says Alice, stop speeding and do you want
to see a picture of my wife No, Cervantes
did not write "Because I Could Not
Stop for Death" and I will be
sitting here all day in this fucked up shit god
dammit click click click I keep looking
at things like pictures of your husband
which makes me feel sick
and watery Now a young boy, maybe 8 or 10
in a booth across from me
is telling his mama his daddy's new girlfriend is ugly
"She's ugly, mama" and trying to comfort her
Do you want to meet in the Home Depot
parking lot? I don't think this is a good
If I find you with him I'll kill him
and I'll kill you and no one will
know where your body But your husband
isn't ugly he is beautiful leaning over to look at himself
in pond water or leaning over
masculinity itself leaning over the family
he has made for himself and the pond
is male because he owns the pond
and the guns are male because he owns the guns
and what's happening is male because he owns the factors
that go into the car is male because he owns the police
and Home Depot is male because he owns and owns
and owns and all he can do is own
everything that will rot
like privacy or speech or porn or black swans
or my big tits which he misses
Fucking swans! A man decides to sit
next to me and he is frantically hitting
his Egg McMuffin on the table and then walks
outside and smokes a cigarette and returns
to his seat and starts hitting
his wrapped Egg McMuffin again
and then he sees my computer and asks
to check his Facebook So I let him
and then he wants to be friends on Facebook
and leaves his phone number on my page
and I "like" it and then in the background
the little boy's like "She's ugly, mama
She's so ugly mama" and the mom
is like "Is she? Is she ugly?" And I think the mom
is ugly even though I don't want her to be
and the other kids at the booth
are drinking milk and they are chubby
and eating fries and saying
"Yeah she's ugly
Yeah mama she's so ugly
You wouldn't want to meet her
because she's so ugly"


From Steal It Back (Saturnalia Books, 2015). All rights reserved. Reprinted with the permission of the author.

On "I Grade Online Humanities Tests"

I wrote this poem in the Leon County Public Library in the summer of 2012 or 2013…I can't remember.

Eventually, the woman is unable to stand up to either of these men.

They both want things from her that the woman can't give. I'm not talking about sex. Something more than sex and less than sex. They want the woman's woman-ness and she is thrown into the eye of the storm of possession.

The woman doesn't know what to do.

The woman feels like she has slipped very far into a Southern Gothic full of violence and guns and depression and terror, like being inside the maze of the mind of her own demons. Had the woman orchestrated this whole thing? Which way does the woman go?

Suddenly, the woman finds that she is at the center of the terrible story of her own creation and the terrible story not of her own creation, that is the most common story of bourgeois capitalist life (affairs, violence, wage labor, sex and reproduction and the reproduction of culture via data entry), all of it replicating like McDonalds hamburgers which is also the setting of the poem.

The woman is keenly observant. She is a listener. When people sit down to eat their hamburgers, she hears their stories about swans and cars. The woman lives in a world where she is noticed. The woman lives in a world where men want her to send pictures of her cunt to them. What happens when the woman gets tired of saying no? What if she stops doing anything? Is this a kind of suicide—letting the desires of these men overtake her?

Most of all, the woman hates it when you can't say no and you can't say yes so you just don't do anything. The woman hates that kind of passive violence too—just sitting there and waiting for everything to collapse. The woman feels that it's abject and trashy. The woman doesn't know—is it a violence born of depression or fatigue or work or debt? The woman wishes she could be another woman who had more energy.

Here are some questions:

How do you navigate a structure that wants to kill you?

How do you learn what to do?

Who teaches you to survive?

How do you get tangled in the desires of other people?

How do you get tangled in the desire of other people to possess you?

Why are women killed by their husbands?

Why are women killed by their boyfriends?

Why do women stay in abusive domestic situations?

What is the way out?

Who is there for you?

Is James Franco there?

Is James Franco a poet?

Where are you, James Franco?

Is James Franco there for you?