Home > Features > In Their Own Words > Traci Brimhall on “Dear Thanatos,” 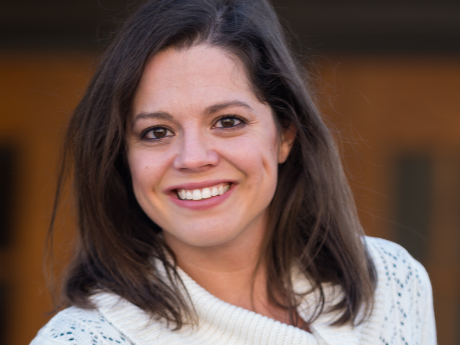 Goddamn the sweet ease of night.
Damn the daylight, too. Dream me.

from the side of a man who begs me to dive
the well and bring up the boat. I ate the liver

of a seal and a narwhal's arctic tongue. I shot
a humpback with a harpoon. It struggled,

but it sang the moral mysteries, moan
edits oral history to the submarines as it fell,

its body a hundred-year feast for the ocean floor,
the testament in its belly gone so wild,

so racked with doubt, not all the fat on
the whale's back could burn the meaning out.

From Come the Slumberless to the Land of Nod (Copper Canyon Press, 2020). All rights reserved. Reprinted with the permission of the author.

Writing books has largely felt like long-term, monogamous loves, but in between loves I still want to write poems, and for the last decade my "one night stand" poems have been epistles to Thanatos, the Greek god of death. I can't remember when I had these first casual encounters with darkness in my poems, but I found that unlike other poems where I struggled greatly to say what I wanted to say, a letter to the fearful and shadowy parts of myself always responded quickly and a lyric rushed out. Something musical and eerie always came out of every attempt, like a music box wound a few clicks releasing a few strange notes rather than wound far enough to give the full melody. They are pieces that are driven by my ear rather than my mind or heart, an aural leaping that feels somehow related to parts of Disney's Fantasia—full of myth and mood and strangely sexual gargoyles. I never considered them as part of book. Part of their pleasure was that they were something else, something fun, something temporary. But like many intimacies, the longer I spent with these dark epistles, the more I cared about them and wanted to see where else they could go.

This string of "one night stand" poems was born out of an impulse to sing rather than say, but it was when I started to write to Eros, the Greek god of love, that I decided the Thanatos could stay. The darkness alone didn't feel like it deserved a place in my new book about my son's birth during my friend's murder trial, but once I paired that urge toward destruction with the impulse (and deep saying) of letters to Eros, I found the balance that let me invite in these years of poems to the parts of myself I fear. I haven't found an abstraction to write to since I gave the Thanatos to my book, but maybe I will write to it again soon and see what it has to say. Or better yet, what it has to sing to me now.