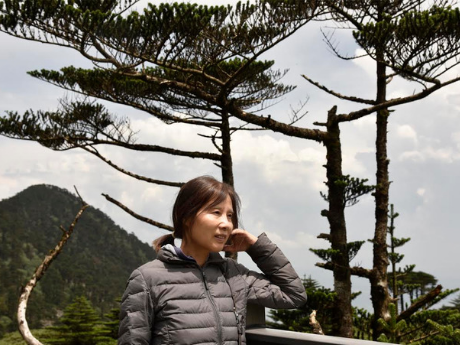 When did you write your first poem? What was it about and why were you inspired to write it?

I've already forgotten about it. It was a very long time ago, during the Cultural Revolution. At that time, I would jot down some of my thoughts and feelings in a notebook. Just for self-satisfaction, that's all. I vaguely recalled that it had something to do with the sea. It was copied on the wall newspaper in my middle school, Fuding No. 3 Middle School, in 1972. But I no longer remember its contents, and why I had wanted to write it. Perhaps it was related to some of my childhood experiences. During the Cultural Revolution, my father was demoted from his governmental post and sent to the country for "re-education." My mother, also affected, wasn't sent to the country where she was allowed to teach in a primary school.

In those days, most village schools were set up temporarily in the borrowed sites of ancestral halls and monasteries, which were usually found in the village outskirts. Not far from the field was the gray, sinister sea. A huge patch of shoal emerged after tides ebbed, and many adults and children would go there and catch little crabs, dig for oysters in the rocks . . . . Sometimes I joined in, too. When the tides rose, yellow seawater approached aggressively before soundlessly drowning the trenches nearby. All this seemed so nightmarish! Once, I was washing some clothes by the river. What normally appeared as a shallow river suddenly became a gigantic, horrifying spread of bubbles. Later did I realize that it was the tide rushing in from the sea beyond. I then discovered a muddy, heavy, and threatening sea that came close not just to the village mud grounds, but also to the poverty, darkness, and bleak desolation in life. Yet, I saw in some children's books beautiful illustrations of the sea, with clouds and in an azure blue, that looked totally different from those existing in my reality. I was probably inspired to write my "first" poem because of this poignant longing for such clouds and sea.

a poem of mine   a life
two seas used

You have worked for many years as a theatrical stage and set designer at the People's Art Theater in Fujian. You, too, are a visual artist. In what ways has your work as a theater scenographer and stage designer shaped your poetic thought and imagination?

A theatrical stage design is the creation of a space in which a performance can occur. It must possess a functionality. For instance, for an actor to walk, run, or jump on the platform, each onstage "pivot" must exist for a purpose. There is no room onstage for even one dispensable object. And scenic elements are, in turn, arranged and tailored to unfold theatricality. Further, a stage design must best dialogue with textual meanings and bearings. It needs an imagination that brings to light the dramatic spirit and synergy, among others. My poetic creation is basically in sync with my scenography or stage design projects in the sense that both working processes influence each other. Perhaps this is why my poems contain a little more objectivity and syntaxical autonomy, emphasizing more on "organic combinations":

Can you tell us a little about your reading life?

In the vast sea of books, I feel so lucky whenever I come across a wonderful book. At the same time, I can't help but think of the proverb, The spirit is willing, but the flesh is weak. Reading is like moving rocks to build a mountain in life. It can be very exhausting! I would love to reread Hermann Hesse's The Glass Bead Game, Michel Tournier's The Erl-King, and Goncharov's Oblomov.

Let me, too, mention three artists: Brecht, Beckett, and Gao Xingjian. They are no doubt familiar names for most theater practitioners, but to me they aren't just influential dramatists and directors who have innovated the art of theater-making—they are also novelists, poets, theorists, and critics. Beckett is, additionally, a translator, and Gao a painter.

Can you also share with us a few of your favorite writers or artists whose work believes in ecological mindfulness?

Many writers whom I admire are capable of praising nature, while expressing concern for the natural world in their literary creation: Goethe, Tagore, Elytis, Octavio Paz, Thoreau . . . I am also interested in contemporary Chinese poets such as Yu Jian who write with an awareness of our current climatic risk.


Adapted and translated from the Chinese by Fiona Sze-Lorrain

* * *
Yi Lu ( 伊路 ) is a theater scenographer who leads a parallel life as a poet. Born in 1956, she is the author of five books of poetry, including the award-winning titles, See (2004) and Using Two Seas (2009). Her bilingual collection of selected poems, Sea Summit, translated by Fiona Sze-Lorrain and published by Milkweed Editions, is a finalist for the 2016 Best Translated Book Award (Poetry). Yi is known for her elegant and distilled lyrical voice, as well as her ecological awareness. Her honors include the Hundred Flowers Award for Literature and other distinguished literary prizes from Fujian province. A theatrical stage and set designer at the People's Art Theatre in Fujian, she lives in the southern coastal city of Fuzhou.

Fiona Sze-Lorrain writes and translates in English, French, and Chinese. Her third poetry collection, The Ruined Elegance (2016), out from Princeton University Press in the Princeton Series of Contemporary Poets, is a finalist for the Los Angeles Times Book Prize in Poetry and is chosen by Library Journal as one of the "Best Books 2015: Poetry." The author of two previous titles, My Funeral Gondola (2013) and Water the Moon (2010), as well as several translations of contemporary Chinese, French, and American poets, she is a zheng harpist and an editor at Vif Éditions. She lives in Paris, France.