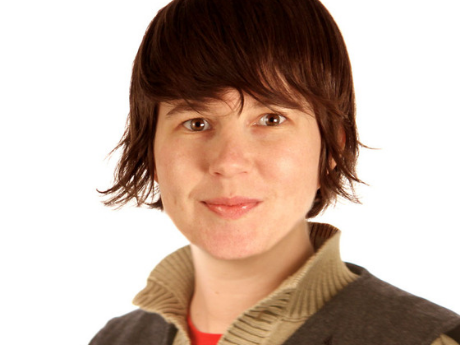 I like to drink my earl grey tea just after I've brushed my teeth because it tastes extra fresh like this — like it's from the produce department or something. No one knows this anymore. Every year, I Photoshop my college ID to keep it current, and then I go to the opera where it makes my body feel both foreign and local at the same, and I like this contradiction. It's the same way I feel when I write about how the word and is different from the word human. And I think that if everyone could just be a little more and, we'd all be a lot better off.

I want to know these things about another human.

The house that I'm now living in has a television, which is the first time I've lived with a television since I was in high school and lived at home. I've now learned from Oprah what forgiveness means. She said that to forgive someone means that you've realized you do not wish you were any different than you are right now. This does not mean that you must love what is to be forgiven… Or it went something like this… There were no colors. This never happened.

I understand now that this is what happens when a human tries to become an and: the language won't let us.

I'm writing these stories in reverse now because I can't remember how to emit time anymore. I wanted to curse Sir. Don't you know she's got no memory!? But the one from sixty years ago is like a glass of water only even more clear: it doesn't even have that distorted part at the lip: the part where you can't tell how tall something is. The problem is is that her sentences have to exist right now. This is what the limit of her body is.

Sometimes I think about what it is like to live in Colorado now for the first time in three generations, and I wonder if the memory of the body might be genetic.

Mrs. Alice, what are the limits of the body?

This is… This is…

And then that was it. It was like she had forgotten how to make a sentence anymore. This is what? What is this? Or was it, This is, period. I'm so afraid of this. I want to make these sentences. And I want to make them sixty years from now, too.

I work most days as a book designer, and two nights ago, I was working on a text about phenomena when I noticed that something strange was happening with the letters. I zoomed in and in and more and again. I saw each letter up closely, and I saw that they were breathing — literally and slowly. Maybe you don't believe me, but I saw this vividly. It was like the letters were made of tiny humans lying on their backs with their arms crossed over their chests. They looked something like miniature living corpses on their deathbeds. It seemed that they might be suffocating one another — being so closely piled. So I gave space around each letter and word and line and margin, and then I zoomed back in and in and more closely still, and again, and they had stopped. Entirely. There was no more breathing — not even slowly, not even a little.

From inside of my dream, Sir asked me if I was dreaming. I said, I don't think so. He said, you know, this is where the word goes when it's ready to die. It goes inside the book, and it holds itself here.

The next morning, I got a phone call that the author had died.

Can I still write you little letters even though you're dead now?

Introduction to the work of HR Hegnauer
Eric Baus

HR Hegnauer's first full-length book, Sir, recently published by Portable Press @ Yo-Yo Labs, is a sustained investigation into the complexities of language, subjectivity, memory, mortality, and social relations. The book begins with the words of Mrs. Alice, presumably the speaker's grandmother, who says:

Over the next 80 pages of prose vignettes, letters, and lyric fragments, Hegnauer enacts this advice. The opening recalls Akira Kurosawa's statement: "To be an artist means never to avert one's eyes." However, the intimate urgency of Mrs. Alice's voice radiates beyond the realm of art-making and into broader questions of how one lives a life and constructs an identity while negotiating a growing awareness of death and forgetting. Hegnauer writes: "Is this a project about remembering what losing your memory means? Yes. I think it is. One second. Now this second. Now this second, too. This is how the brain works in these moments: like a stutter, like a healthy stutter." Hegnauer's approach of accumulating poignant details merges the immersive, elegant clarity of Joe Brainard's I Remember with Gertrude Stein's sense that "There is no such thing as repetition. Only insistence." As readers, we circle around and swirl into the perceptions of this cast of characters while the speaker's reflections propel the work through a series of compellingly tangled moments: "And this is the way I like to hold this thought: with the subtleties of who knew what and when they knew it."

The title Sir refers to the grandfather's nickname ("When I was still a little girl, Sir once jokingly said to me, call me Sir. And so I mostly called him Sir.") but the word also functions as a way of interrogating gender: "My favorite thing about the word human is that it's genderless. Even person sometimes only means men. How did that happen?" Elsewhere, Hegnauer critiques the inadequacies of gendered address: "My mother doesn't like to be called ma'am because it makes her feel old. My father doesn't like to be called sir because that just sounds strange. I like when people call me ma'am because it gives me hope that genders might be fluid. It becomes a special occasion for me, and I celebrate it by marking it on my calendar. But more often I'm called sir, and if I'm feeling extra confident, I like to respond, I am not a sir!" Another anecdote illustrates a refreshingly complex approach to naming: "The rabbit was named Sarah because I liked that name; then we found out that she was a he, but he liked his name, and so we kept it. Turned out he liked his full name even more — Sarah-The-Boy, and so we called him this, and this was never strange."

In many ways, Sir reads as a performance score. The sweeping voices of these characters echo, overlap, contradict, and amplify one another even when read silently. However, it is worth noting that Hegnauer often performs large selections of this work verbatim from memory. In performance, the themes of embodiment, dementia, and the importance of community become even more emotionally charged and conceptually resonant.

I've been writing through what a memory can be and how to preserve it; how to keep it, lose it, and retrieve it again. SIR is an attempt at thinking about what it means to be a human alongside another human — how to grieve the loss of memory at the same time as the loss of life, while trying to keep in mind that we are living right now. I am indebted to my grandparents who have inspired the characters of Sir & Mrs. Alice.

Sir happens where the thresholds between the living, the dead, and the demented become progressively less clear. To remember that we are not above being human; that we are only humans trying to live amongst humans. I see this project as a form of archive. Of course, all writing is an archive, but to archive a story of dementia is inherently contradictory, and an archive of the ethereal is in some ways inconceivable. Then Sir asks the reader, can we archive the inconceivable contradictions? Will you try with me to not miss anything?

There are also underlying questions around the body's relationship to gender, but to ask these questions are not the main purpose of the project. I have found, however, that it is unavoidable. I think of gender as a dead place, a failed place. And in part, I am writing an elegy towards gender.

During the writing of Sir, I would often ask myself Robert Gluck's question What kind of representation least deforms its subject? I naturally come to a place of language, art, and media, but first, I come to this question in regards to my own human body. How might I represent myself so that I least deform my thoughts? Much of this project is concerned with dementia, and I believe that the form should attempt this idea, too. Some vignettes are long and clear while others are brief; when one story ends abruptly, it may be followed by something a decade later. I have been careful to not exploit these stories, yet at the same time, to not make them any more beautiful or desirable than as they exist. I want them to feel human, and of course, that is not always a desirable thing to be. But as Sir says to the narrator, Walk steady now, I've tried to place myself here as the author.