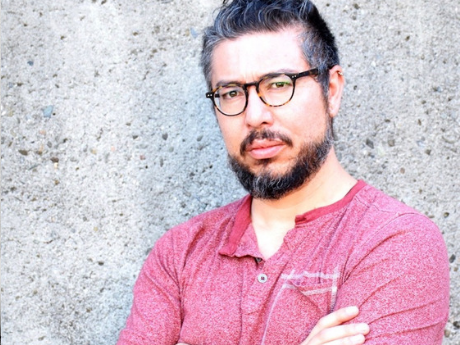 ﻿The Curendera's Tale of the Wicker House

Once, a girl walked rag dolls with the name'sMama & Papa through a doll house, the button-eyed dressed with the love her living parents refused. The girl, to feel this perfection, smeared her face with goat butter & squeezed into balsa wood architecture. Inside, she witnessed the vastness of a world to come. Her mattress was a steppe rising out of a frozen plain. Her toys fled the artic night. Hung on a wall, her rosary, a gift of her grandmother, swung the constellations crucifying Christ. The girl tried to pull back into the unimagined world; however, the goat butter had hardened & sealed her skin to the house. As she wept & screamed, the dollhouse echoed with the patient love of parental indifference. On her bed, arms outstretched where hands had clawed, she soon slept.

In tortured praise, the child dreamt: the sun threw spears of flame. A comet struck the earth turning a lake of dust to magma. Its surface hardened into mirror. The glass reflected a sky black with no stars until, shattering, man & woman emerged. Man & woman were two heads at either end of a single armless torso. They skipped like sparrows through fields of poppy. Beneath a lemon tree, they merged in a profound & endless kiss. Startled, the little girl cracked her dollhouse in half against the tree's trunk, splinters piercing her cheek & chin. The lemon tree, sudden as sunrise, blossomed. As the first lemon exposed its round, she plucked it, unpeeled the fruit. The little girl licked & suckled its sour body. Laying the pulp in the remains of the doll house, the girl crawled below the tree's canopy. The girl's night-tar hair pooled around her, face haloed by torn lemon peels.

J. Michael Martinez's work is writerly and lush. Martinez has set heady terms for the ambition of his work, much like Mallarme's "pure poetry." He creates textual maps of the histories through which he comes to be and in doing so enacts the polyphonic strains of influence, both intuitive and aesthetic. His poems are maximally lyric, almost Romantic at times. The high lyricism in his work constructs a profoundly singular voice, one that still engages with the post-identity tradition of Gloria Anzaldua. Like Anzaldua, his poems are political because they tell the complex stories of a marginalized culture; develop a system of ethnography out of public and private family history, but his work is also deeply prescient; he is in the forefront of emerging poets of color resistant to the narrow channels previously available for identity construction. The voice as corporeal experience is a striking result of this investigation. In his first book, Heredities, he announces early on that, "the noun never sutures to the named body," but ironically the book goes on to attempt to do just that, use language as a means to providing a ghostly shape to the self. Reading his work is pleasure and edification, a perfect balance of both of these reading sensations.

"Our lives are buildings made of lies. We have to lie to live. But to write we must unlie."
—Helene Cixous, Three Steps on the Ladder of Writing

When I began to seriously pursue language, I was writing letters to a distant love. I was trying to communicate all those overwrought emotions my introverted fifteen year-old self refused to speak. Those intimate, inadequate words became (perhaps cliché) my "worlding" to my, then, beloved.

When I write now, I still harbor, albeit less quixotic (thank god!), this original impetus: to world through to love. Regarding the wonderful Allen Grossman's poetics, an editor states, "Poetry's singular mission is to bind love and truth together—love that desires the beloved's continued life, knotted with the truth of life's contingency—to help make us more present to each other." I empathize deeply with this: the contingent fact of mortality and a bond begging for eternities. As my writing life has developed, I've begun to heed Helene Cixous' demand: in writing poetries, to die to my "self," dismantling the lies surrounding my life. As I bear myself to a deeper honesty toward the beloved. As the word dismantles purity into a thing more raw.

To learn to "unlie" is a method of dying—not physically, but spiritually, emotionally, ideologically—through to a space of pure availability, open to plenitude. To write poetries: to learn dying, to accept that which exceeds me. To step into, not selflessness, but subjectivity exceeding the "individual" into inexhaustible individuation. To enter into intimacy with negating plenitude. In Chican@ theory, a sense of this is known as mestizaje, a relinquishing of any identity founded in any absolute way; rather, one's subjectivities are conceived as always becoming.

For me, this intimate "dying" is that which exceeds me i.e. that most knowable unknown I must reconcile with. In reconciliation, my writing then dialogues with what is most alive in me. To write poetries: to gather my dying into intimate clasp. To possess the lesson of positive negation & beg its song.

In my writing of dying to myself, as I unlie my life, in the obscurity of the excessive potential, I often enter a state of, as Maurice Blanchot states, "clarity without light." An endless field where the lilac's white & curve is called toward a light absent of any star.

As I enter this field, one planted by history, my history arises. A heritage sowed and, often, disgraced by a particular polis. I unlie to weed this garden. To unearth the polis and its claims of who and who is not a citizen of its fields. To call to question those politics disgracing the inexhaustible.

I enter the garden so contradiction may be bleed & swallowed. So it may be sung. Where the "@" of the Latin@ is engendered. To enter endless becoming by virtue of the written word. To unlie. To weed the "essential" and allow an opening into this field. Between mortality and love, I write to risk my "self" to the last moment to recognize the illusion of the momentary. Transparently. To realize, there is no end, only love. A type of starless eternity.