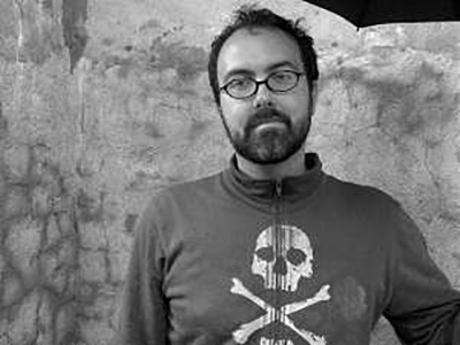 i. Uniforms of the American Revolution Coloring Book

I apologize on behalf of the dead.
They do not mean to hurt us.

They show us a way to be in the world,
then leave us for the deer and salt licks,
the reed-shrouded fog in the marsh.

I knew a dead person once,
and I consider myself lucky.

To wear the ghost of him
like an untanned bear hide brought me
a secret pleasure I have never felt since.

Who needs lungs when you're flying
among the trees?

It's what the taxidermists all say:
We construct the infinite spirit
and you ignore the palpable soul.

To wear the uniform of the dead
is to walk through mountains.

Show me the way to the doorless sea,
to the river of brine and day,

and I'll give you hands to breathe again, lads,

the most important things you'll need
to hold this land
that will never be yours.

From Meditations selected by Mary Oliver for the PSA National Chapbook Fellowship competition. All Rights Reserved.

It's not often that a poem can physically alter one's life. And it's not something one should readily admit in a public arena. It's a tricky subject, full of the sentimentality of After School Specials, or Narcotics Anonymous testimonials. I can say, though, that here…now…on a cool spring day in a city full of the kind of green only the South can give the world, that this poem, this Larry Levis poem, written in the middle of his all-too-brief career, altered me. Saved me, even, from a broken, suburban life. I didn't consider it at the time, of course. My father died, I broke up with my girlfriend of many years who wanted so badly to marry, have children, eat burgers on the patio in matching khaki shorts, and I moved to Richmond, Virginia, to study with Larry, my new hero of words. It was this poem that made me do it. After Larry died, I helped to clean out his house. I filled my pickup truck with the objects of his life, and dropped them at the Salvation Army. I also gave up on poems. Several years later, it was this same poem that brought me back. So forgive my sentimental response, if possible. People die, I know. People also live, and I am one of those, as are you. And as part of the living we must do our part to give something back to the dead, whatever it may be.