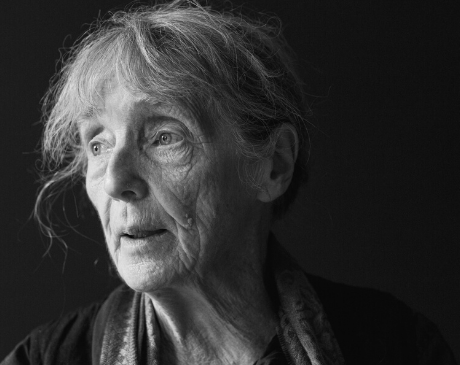 —There is a poem by Rae Armantrout that is called "Overhearing" and the first part of it goes:

The way "The Tennessee Waltz"
is about having heard

"The Tennessee Waltz"
before:

is what we call
beautiful.

—Is what true—the poem or its statement about beauty?

—Well, I guess the two are inseparable.

—The words in the poem make the poem true insofar as anything is true.

—Neither do I. But I am having a problem finding another word for something whose values are self-contained.

—I wonder if you realize that "The Tennessee Waltz" is both the name of a song and of that song's subject, and that the subject only exists as a dance with the same name. There is something illuminating about that.

—Well, think. . . Why else does she say that self-containment is beautiful? The truth is, it is beautiful in this case because it spirals back and back again. It is double what it was. "The Tennessee Waltz" was beautiful to the person who had a memory of it being beautiful when it was first played for him and his darling. This is the way the beautiful works, through a snare of earlier perceptions. There is no perceived beauty that isn't in a sense a second experience of something. Like a waltz, it is learned for a whirl. —Is this why the poem is called "Overhearing"? Because someone has to be outside the self contained, in order for it to be self-contained?

—It's the frame around the mirror. But incidentally, do you think she means what she is saying in the poem?

—I'm not sure. She is ironic. She says that "a floral nostalgia" is called beautiful, and that little word makes her whole statement ironic. When you say something is called something you are saying that it doesn't mean it is that. Necessarily.

—So her irony is a kind of uncertainty?

—Exactly, and just the opposite of true. . . except, ironically, her uncertainty is a form of certainty. After all, she says "we" in a way that makes a huge assumption about all of us.

—You're right, and I too am puzzled by the mix of uncertainty and certainty that is in her poem. On the one hand, she is bewildered; on the other hand, she is making a strong statement about what we all agree on where beauty is concerned.

—The term "floral nostalgia" seems ironic to me.

—How can you spot irony?

—It's tonal, like irritation. And maybe it is irritation rather than irony that she is expressing--irritation at the way the beautiful is saturated in emotion and memory.

—Wait a minute. Is that because we're not allowed to say "beautiful" any more?

—It is basically against the law, it's true. . . Yet everyone uses the word "beautiful" and often in conjunction with the word "love."

—You're right. "Love" and "beauty" are almost interchangeable. Equal in their meaninglessness. "True" is too.

—But then why does everyone know what each one means?

—In the context of other words, each one of those abstractions makes emotional sense.

—Believe me, you would know what I mean if you knew what it meant.

—You mean if there were a contained bundle of references to put it in? Words?

This poem is reprinted from Art in Print. The November-December 2018 issue focuses on the relationship between poetry and the printed image, including works by William Blake, Blaise Cendrars, Augusto de Campos, Martin Wong, Deryn Rees-Jones and Kate Wakeling as well as new poems from Mary Jo Bang, Timothy Donnelly, Mónica de la Torre, Major Jackson and others.