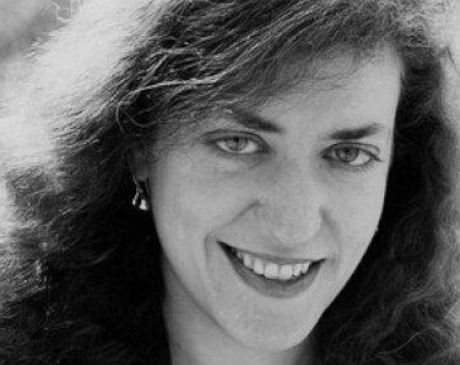 I would like to tell you about a lovely stanza form I've long been an ardent fan of: it was conjured up in a simpler time by Classical Sappho.

This stanza, as you can see, is composed of four lines. The first three lines, 11 syllables long, are called hendecasyllabics; the last line, only five syllables, has a name that seems designed to make up for its diminutive status: the adonic. In addition to its strict syllable count, the stanza also has a very particular meter: in the first three lines, two trochees, followed by a dactyl, followed by two more trochees; in the last, one dactyl and one trochee.

I first learned about this form in the fall of 1987 when, a junior at Yale and a novice at poetry, I enrolled in John Hollander's Advanced Verse Writing course. Just back from a summer working as a waitress in London—during which time I'd resolved to Get Serious about my writing and even made a few stumbling attempts—I told myself that this course would be exactly what I needed. Indeed it was; more than I could have ever guessed. And of all the forms Hollander taught us, the sapphic stanza is the one I'm most grateful to have learned. Hollander, a firm believer in specific assignments, commanded us one week to write a poem in this form; and although at first I shuddered at such an onerous task, I found, on finally sitting down to write my poem, that it almost wrote itself—so irresistible was the rhythm, so compelling the alternation between the stanza's long and short lines. I looked up after several hours and found that I'd written a four-poem sequence called "Seasonal Songs." Looking back at the poem now, I'm amused at the grandiosity of its ambition: each season stood for a different historical period, with spring's Renaissance giving way to summer's Enlightenment, autumn's Romanticism, and (can you guess?) winter's Modernity. But I can also see, with the clarifying light of hindsight, that a lifelong love affair was beginning. Here's the first stanza of the third poem:

Autumn chills in moments of sudden sorrow,
as when slow, disconsolate winds begin to
stir and trouble flourishing leaves until they
flicker and struggle.

When I graduated from college and started working on the poems that would eventually make up my first book, The Other Stars, I kept coming back to the sapphic stanza. In my poem "Stage Directions for a Short Play," for example, I wanted to contrast the calm state of my poem's protagonist, a jaded "roué," with the force that an unexpected memory of an old love has on him. The poem's sapphic stanzas, marching passionately along, helped me convey this contrast and give my roué's inner turbulence a formal counterpart. The poem ends like this:

Vases fly; silk garments begin to flutter,
then are blown, in sopping-wet scraps, around him.
Roué squeezes armrests and shivers in his
nakedness; curtain.

In another poem, "Dissolving Views," I used the stanza to give the poem's subject—people roaming around a city park, looking for love—a more traditional underpinning:

High noon in the park, as the year begins its
onward march to truly infernal weather.
"Is it hot enough for you?" yell the normal,
but on the sidelines

all the lonely hopefuls whose blood is warmer
than their beds have gritted their teeth and gathered
in their finery for another round of
amateur sleuthing.

The poem's sapphic form, I hoped, would serve as a sharp contrast to my contemporary subject, but I also felt that it could bestow on that subject a subtle dignity: what these people are doing, the form quietly reminds us, has been going on for thousands of years.

If you try your hand at this stanza, you should be warned that it's addictive. When you're in the middle of writing one, its rhythm—so close, after all, to a heartbeat—has a way of entering your bloodstream when you aren't looking. Get up from your desk and take a walk and clear your head, and you'll find that the stanza—the last line especially—is following you. Shave and a haircut; oboe concerto; Emily Brontë; over and over; where am I going? It's insidious; it's unstoppable!

The sapphic stanza has a long and interesting history. The Greek poet Sappho invented it and gave it its name; the Roman poets Catullus and Horace used it for some of their finest poems; Algernon Charles Swinburne, an accomplished classicist, wrote a beautiful poem simply called "Sapphics": read it if you're interested in a "standard" example of the form. Among the contemporary poets who have written sapphic stanzas are James Merrill, Rachel Hadas, Marilyn Hacker, Timothy Steele and (of course) Hollander. Some poets have altered the form slightly: W.H. Auden's "Fairground," William Cowper's "Lines Written During a Period of Insanity," and William Meredith's "Effort at Speech," while all recognizably sapphic, also take some liberties with syllable count and meter. But although I'm intrigued by their varied versions, I find that I'm more reluctant to tamper with the sapphic stanza than with any other form. Why? I suppose because its rhythm seems so perfect—so close to the way we think and talk at our most impassioned moments—that I don't want to spoil it, want to take full advantage of its propulsive, remarkable force. Whether you end up varying it or not, though, I urge you to try it. It's a haunting, beautiful form that will grab you and refuse to let you go until you've succumbed to its many charms. End of discussion! (This last line, you'll notice, is an adonic. Clearly I'm hooked.)