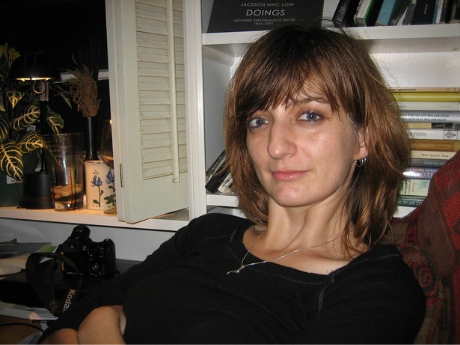 The delineations of Americanism are as tenuous and difficult as the history of this country itself, starting with still ever-present questions of first occupation versus immigration versus inheritance by imperialism. I'm an American poet because I'm here now, and I consistently query the uncertainty and trappings of defining who belongs, what privileges that entails, and the ways in which we residents of the U.S. co-exist. I explore such concepts in my poems, and I look to other poets who interrogate notions of the "valid" American as well as the range of American experience.

There are U.S. American poetries that, in the broadly abstract, embrace a kind of fearlessness and progressive sentiment that likely stem from frontier mentality. People still come to this country with such resonant hope and courage. Some of that forward-thinking courage may fade as the country's inhabitants begin to fear impoverishment even as many are moving into it.

What I mean is that the frontier mentality was not simply founded on conquer and take; it was premised on open possibility, founding new ways of life that were less restrictive than the known past permitted, and looked with excitement for what was as-yet unknown. That premise compels our poetries, as well as our painting and film, to go beyond documentary and protest of what is to the grand injunction to create, to "make it new!"

American poetries, generally speaking again, can be spoken of in the metaphorical sense as pushing boundaries (via subject matter, voice, etc), breaking rules (form, structure, et al), and compelling a sense of optimism and ingenuity regarding what can come to be and how we can make that happen.

Many explorers of "just beyond the dark perimeter" have had the luxury of actual means and safety, to more freely turn towards that unknown and put pen to paper, unfettered. With the weight of that tradition, even in times of fear and crisis, innovation (as well as rebellion and resistance) pushes on. I don't think that's solely an American phenomenon, but it certainly has been where much of the most exciting writing has happened, even as time turns our Whitmans, Steins and Dickinsons into tradition.

I can offer no pat reply to this intimidating question – what doesn't factor in? In fact, my filter settings are too low for some folks: I want and make poetries that let the kitchen sink in and the plumber drinking beer beneath it and the canary squawking out against the half-closed window while the oil spill makes its way up the Gulf and through my brain. I may edit a bit later.

I like Virginia Woolf's dictum, however true or false, that goes along the lines of 'Nothing has happened until it has been written down.' Call me transparent, but the mind is a messy place. And I want to capture it all. I use words on the page to work through so many issues, almost in real time and certainly with real fearlessness, however imagined in the moment.

Issues that intrigue me – a quick geography: our hold on the lapels of immortality, gender (in all its bending behaviors and footholds), class (and the rigidity of low brow vs. high brow, safety, survival, etc), cruising caressing and catapulting the categories that bind and delineate, calling out the false-bottom truths in stereotypes, the what else, how group-think can constrain an entire country, why some of us readily do ill fully aware and/or with glee, ontological spelunking, the world in a grain of sand (O Blake), the world in a world of our own private sculpting, how we can live an entire blindered-life awake only in that created world, how that can be a prohibitive world or an opening blossoming one, cultivating awareness (Old fish to young fish, "How's the water?" "What's water?" –David Foster Wallace), the lust for and pissing fear against the outer darkness and outer light, the ways metaphor births us (chicken or the egg? matter or spirit?), how we traverse so much but return to thinking in terms of progress even as we repeat ancient patterns with historical rhythm—and that's just for tonight.

So my poetry is of the moment and how the moment extends, transcending time, feeling whatever is at hand and in the cabeza, which may seem a messy way to go for a poet, especially if one wants to be accessed and accepted and proliferated. But jouissance (oh that blissful jolting) is one of my guiding forces while writing, and I can only achieve an orgasmic poetic experience when permitting the orgiastic collision and collusion of everything in energy along with what's spinningly acute. I try to think lightly to please the masses but make no apologies for not ordering down, making explanatory connections, and scrubbing into a clear-cut crystalline form, America. I'm sorry; my poetry is no apology.

Popular culture cameos regularly in my work as I'm no true adherent to the use of high and low culture as a means for distinguishing myself on the status quo scale. I'll die soon enough regardless of how you place me, whatever class you believe in. People speak through pop culture, whether it be about a philosophical issue or as a conveyance of intimacy. As a poet, I'm invested in exploring various means and methods of communication. As a person, I use pop cultural references regularly and try to be as attuned as possible to what and how those references function, regardless of how fleeting the specific references are. I am porously of and above my culture; I try to be limitless through that, even with cultural references.

My own reading history covers a varied ground, a ground I can only very incompletely represent in this space. In short, I return to Cesar Vallejo, Tomaz Salamun, Gertrude Stein, Laura Riding Jackson, and John Ashbery regularly. I love a number of contemporary poets off the cuff like Lidija Dimkovska, Richard Siken and Ana Božičević – the danger of such lists lies in the fact that many poets speak to mood or have written work that is timely, topical, etc, and I am dangerously omitting a great number who have influenced me and are in dialogue with so much more that is American, even extending beyond the work of the poets I list.

Many writers who are not well known for their poetry but also make their way into my writing include James Baldwin, Claude Cahun, Zora Neale Hurston, Donald Barthlme, Miranda July, Carson McCullers, and more. I'm also omitting key musicians and visual artists who bear similar weight in and on my poetry.

Time to opt out of claiming who is "most responsible" for American poetics; to do so is to reduce contributions quantitatively and perhaps even place undue weight on poets' mythologies rather than beginning the more complex work of identifying what a noteworthy contribution to an entire American poetics would be – these are the very pitfalls of anthologies that leave me either foregoing their use in classes or, at the very least, constantly supplementing such canonically (and supposedly) representative texts due to incompleteness.

I'm no prophet, so I can only speak of my hopes. I've written of this elsewhere, but my desire is to hear more of a symphonic cacophony that better reflects the range of voices in the world. I'm not popular for continuing to note disparities in publishing practices, but my conscience won't allow me to "go gentle into that good night" without first raging against the ways in which freedom of speech isn't free and noting the implicit injustices that follow by default, however passively or intentional the exclusions. Some prefer I just shut up because they still want to believe, without examining, that the "best" writing rises, regardless of how and what an entire population is taught to read.

Speech requires means and distribution to be heard, and poetry is one of the most dangerous forms of speech as, ultimately, poets are not beholden to the status quo. Poets who do the difficult work of language do not simply reflect the culture, but seek to change it. (Poetry has always spearheaded change from a peripheral position.) American canonical tradition primarily reflects a limited array of white male voices of mostly European descent, which is a pretty homogenous majority when one considers the true range and experience of people by gender, religious affiliation, ethnicity, class experience, etc. writing in this country.

What we end up studying and spending time with, especially as we are trained to read in college, breeds familiarity with and pleasure in specific and limited writing styles (the standard plot has barely changed in a hundred years), subject matter and voices, while implicitly rendering those "other" voices foreign and, in some cases, seemingly rarefied and unreadable. We tend to seek the comfort of the familiar over that which takes us out of ourselves and our base knowledge. This observation does not negate the value of those already-canonized books, but I hope we don't have to wait until the next century for college students to read Harryette Mullen as frequently as Billy Collins.