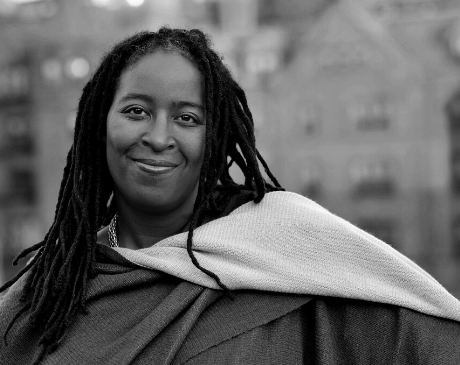 There's the obvious answer that I was born here in America (in the American West, at that), that my parents and their parents and their parents' parents were born in America, that I have very straight teeth via juvenile orthodontia, and that only once in my world travels have I tried to pretend I was from another country (Canada, due to the convenience of the accent) in order to avoid the embarrassment of having to answer to decisions made by the nationally-elected government leaders of the United States. Despite the fact that my parents and their parents and their parents' parents were born in the United States, as African Americans they and I have lived both as outsiders and insiders in this nation, a nation whose identity, though in some ways entirely stable, is also in a state of continuous flux based on patterns of immigration, migration, radically shifting socio-economic roles, and other dynamic variables. My writing, like much American poetry, resists stasis even is it strives to build traditions. The outsider/insider status fostered by, among other things, facts of my race and gender, provides me a view of this dynamic culture and means my poetry is likely to simultaneously embrace and reproach the nation I am to greater or lesser extents encouraged to call home. When I write, I write out of these realities.

There are American poetries. There is no one American poetry. There are those who will have you believe there is one American poetry, but I would argue they are not usually very widely read individuals. I argue this at my own peril, as they are often very powerfully placed individuals. There are too many communities in America that do not share regular discourse but do produce individual poetries for me to believe in anything like the concept of One American Poetry. And I have read too many Top 5, Top 10, Top 100 lists that do not include representatives of decidedly American communities from which can be gathered devastatingly wonderful poetry. Perhaps there is an American film, though if this is true it won't be true for long with growing access to independent means of production and distribution. And though "there may be said to be American painting" there is no more truth in the idea that there is One American Painting than it is true that there is One American Poetry. I'd argue, again possibly at my own peril, that the graffiti art of the Los Angeles basin is the basis of a viable version of American painting (note how the style has crept into popular cultural, museums of modern art, etc.). I could argue the same for a variety of other "folk arts" that represent other American cultures and which, to my thinking, are therefore versions of American painting. I would argue as broadly about the places in which we can find poetries that are distinctly American, that are truly and carefully crafted, but that will be a long time in arriving in the pages of many Norton anthologies.

All these things play a role in my poetry as they play a role in everything I do every day of my life. They play a role in how I approach a loan officer, how I approach my students, how I approach my own family, my friends, the man whose car idles beside mine, the produce at the grocery store. Why wouldn't they play a role in my poetry? "Poetry," said the great late Gwendolyn Brooks, "is life distilled." Where I have lived, who I have been (in my own mind and in the eyes of others), these all direct the ways I do and can and will live my life. Therefore, they all direct the ways I do and can and will write my poems. I don't think this is any different for any person. It may only be more obvious because I am and have been and can be who I am in relation to this particular society. What to Eat, What to Drink, What to Leave for Poison (Red Hen Press, 2006) and Suck on the Marrow (Red Hen Press, 2010), are both books that look at African Americans within historical contexts (the mid-20th century and the mid-19th century respectively) and investigate the ways in which the subjects made lives for themselves in light of often horrific restrictions. My next collection, Smith Blue, is a decidedly 21st century collection, and though at times African Americans figure in it, and though at times there are horrific restrictions imposed on the subjects of the poems, the book is a collection of decidedly American meditations on personal and political conflict, marking the transformations of individuals and ambitions as they record and predict changes in our personal, cultural, and natural environments. History, geography, identity, all these things and more played a role in how and why I wrote these poems.

Sometimes yes. Sometimes no. I know plenty of American poets who take their cues from countries other than America. Are these poets therefore not American poets? I know contemporary American poets who rigidly adhere to conventional forms and others who religiously reject such forms. In 2009 Persea released From the Fishouse: An Anthology of Poems That Sing, Rhyme, Resound, Syncopate, Alliterate, and Just Plain Sound Great. If I learned anything co-editing this anthology of 100 of America's most exciting younger poets it's that today's generation of American writers have read widely and eclectically, draw upon huge varieties of traditions, take what they need and need what they take. It's hard to say that there's any one thing this generation does or does not do since, as a whole, we are doing a little bit of everything. As a collective, we seem to have embraced that rallying cry from one of the films of our youth, "No one puts Baby in a corner."

I'll point out that an awful lot of American poets don't own televisions. Of all the sub-groups in America, perhaps the non-TV-owning poets might be among the least influenced by popular culture. Plenty of us still write about the same things Dickinson wrote about and would argue that nothing could be more immediate than the concerns conveyed in the poems of Emily Dickinson. Poets of this sort have no plans to refocus their attentions toward Lady Gaga or Tiger Woods or whoever/whatever it is the airwaves are spinning over today. That said, of course, we're a society steeped in popular culture, and there are plenty of poets who directly and indirectly incorporate popular music, film, art, and concerns into their work. I realize I'm being rather contrary in my responses to these questions. I have a distaste for categorization because I know, from repeated personal experience, that categories always fail to reveal the whole truth.

As you must understand by now that I don't believe there is any one version of distinctly American poetry, you may understand my difficulty responding to this question. There are poets I place in my personal pantheon. My tastes, in this sense, are quite ecumenical, not at all solely American, nor limited to any one century, nor even millennium. There are poets I deeply revere who have made it into our general canon. Aren't two of the standard answers to this question Walt Whitman and Emily Dickinson? That is as it should be. From their pens emerged new ways of organizing language whose influences still resonate today. There are also plenty of non-American poets who have radically influenced American poetics, my own included, (Basho, Senghor, Rilke, Lorca, Sappho, Li Po). Finally, there are poets whose work I believe is currently overlooked and under-appreciated. Paul Laurence Dunbar springs immediately to mind, but I just released Black Nature (UGA, 2009), an anthology that radically reexamines the position of African Americans in the nation's nature poetry canon, so I could name over 90 other writers whose work I believe has or should be influential to American poetics. My job as a teacher, writer, editor, reader, is to think beyond what I receive as given knowledge and to help extend the realm of what and who and how we know.

If higher education does not completely shut down again (which it may do in light of national budget cuts radically reducing access to state colleges and universities as well as the reduction in scholarship opportunities for America's private institutions), if higher education remains accessible to a broad range of talented young minds, and from these ranks we establish a wealth of talented young teachers, and scholars, and poets, my prediction is that American poetry will continue its dynamic growth, shifting and changing and accommodating new voices and perspectives more and more regularly. The decline of major publishing houses and rejuvenation of independent publishers might mean that these voices do not have adequate opportunities for conversation. My hope, however, is that the presence of a variety of minds and talents in our colleges and universities, fed by the explosion of the increasingly diverse creative writing programs we've seen in the last decade, coupled with increased dissemination opportunities made possible by the internet and other technologies, will mean continued cross-pollination and growth.