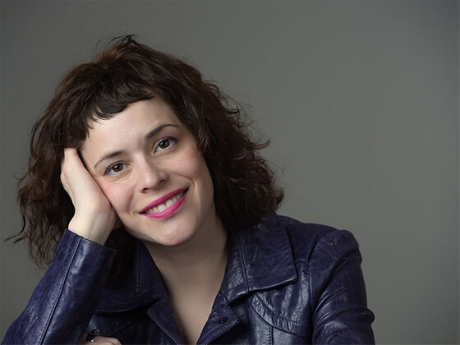 My medium is poetry; my tool is American English, a language I adore for its shorthand syntax, its outrageous slop, its mongrel weirdness. I think and dream and feel in this language like the wiry old rose bush that pushes its way out from my front yard to splay its blooms above the cracked sidewalk. I speak my own peculiar species of idiom, a syntax and slur that rooted in suburban Maryland, and has been continually altered by time spent in the South and Midwest and now New York. The "proper English" I was taught with real strictness in my home of origin has long since grown slack, has sprawled its way down an particularly American path, picking up "y'alls" and "youses" alike. I'm an American poet because Dickinson and Whitman are the great-great grandparents of my poems, and because I freely take cues from the poems of countries and cultures my own ancestors (whose origins were washed away at the moment of my birth) left in order to replant themselves in the United States. I'm an American poet because I get to play. In the ugliest of schoolyards, in the most fragrant of parks. Among broken bottles, littered razorblades, and dandelion fluff. I'm an American poet in the same way I'm American: it wasn't my choice to be born in the USA, and I don't appreciate being taken to task for being its citizen, as its decisions are rarely the ones I would make. But I love the naïveté, the cynicism, the sinister intonations, as well as the candor of the people I speak with in my neighborhood, at the school where I teach. I like how we break and remake. I'm as American as my straight teeth, which came at a cost to my parents, the rearrangement of which caused me great pain. I'm an American poet in that I'm natural and entirely unnatural, and the language I live inside and beside feeds me, endangers me, and recreates me every day.

American poetry has been going gangbusters since the turn of the nineteenth century. Twentieth century American poetry is so volatile, so varied, so wise in how it works off of un-American traditions that I sometimes just have to suck my breath in and take a moment to calm down when I think about it. I've never worried about the health of our poetry. I feel it spilling into my ears; I can smell it in the humid depths of subway stations. There is really no way to answer this question without delivering a lecture / overview of closed and open form as dictated by the work of Eliot and Williams. But what's very American about the movement of our literature is that there are always exceptions. In some ways, we're inbred. Open form has fertilized closed-form, and vice-versa. As such, we birth oddities. Our poems are beautiful-ugly. Our poems beat each other up in bars. Our poems make out beneath freeway overpasses. We sprawl and we shrink. We gape. We smirk, and we sometimes turn away. Even our brethren who abandoned us to live abroad (Eliot, Plath) remain ours: I don't care what you say, they never could escape being known by the raw horn of their accents. Even poems that don't wear jeans, but dress for the occasion, appearing before us with their righteously formal garb: they are the guests at the party who weep after one too many cocktails. They spill their guts to a stranger on the terrace while taking deep drags off a bummed cigarette. They are vulnerable, even when controlled.

But I digress: anyone who argues that a distinct tradition for American poetry does not exist is essentially denying an American history. This supposition that strikes me as inherently flawed. Have we not lived here? My God! Have we not written here and out of here? I know I have. I cannot believe this is simply a product of my imagination. Though it has certainly been most productive to my imagining.

Everything about my life (which happens to be one version of an American life) feeds my poetry, which is different from any sense I have of being a poet, as the sense of "being" a poet is fairly ridiculous, no? Being a woman is being a woman, and by that I mean that I am always affected by it, because I am "it," whether I choose to pretend I'm not "it" or not. However, I believe that the creation of literature, and one's engagement with it, is necessarily an act of empathy. Through poetry, the specifics of a life become general in the best way. We might call it "universal." But it's the particulars that get us there.

I think American poets are distinguished by their regard and disregard for literary tradition and history, all while being entirely aware that such history exists as a most significant influence. Some choose to embrace and remake it (Eliot), others to start anew (Williams), and others pick and choose as if ordering from a catalog (Stevens). Moreover, American poets pull freely from global poetries. In this way, American poets are scavengers of the tradition, putting its lessons to good use, embracing the experience that is being a human being, and then deviating from any customary form or display of language presented as verse. This may appear to some as ignorance married to an intelligence that gives birth to knowledge, but I believe American poems operate within a swervy, super-smart, mongrel mindset: we learn History in reverse. The first history we know is our own, and it's often personal, but then we see the White Cliffs of Dover and cry out! For we know them upon sight, as their visage is suddenly the very image we encountered on reading Matthew Arnold's poem years before. And it is, at once, foreign and familiar.

While I am aware that popular culture is central to most American poetics, my poems don't truck with television, movies, music, videos, and the like. They like to hang out with the moon and all its weary old tropes.

My tradition is at once American and then not. The American poets I love were greatly influenced by the entire trajectory of English and European poets (starting with Petrarch, up through Larkin). You'll note from my use of the past tense that I tend to read dead poets. I also read many poets in translation. When I finally read Baudelaire, I recognized him at once; he'd already traveled my veins in the poetry of Eliot and Plath. For this reason, I believe that we, as American poets, are initially influenced by poetries we have not yet read. (This is backwards history in action: we then read them, know them, grow to love them as our closest kin.) The American Modernist poets did good work for us; they tugged all that history into their poems and by making it their history, they taught us our history (and I am speaking of a Eurocentric tradition, to be sure—in this way, I acknowledge that I am very much speaking to my own history). I have to believe that German poets are hugely influential on American poetry (Rilke, Celan), and that we have often badly used the French Surrealists. Then I think of the significant influence of Neruda. Of Akhmatova. Eastern-European poetry, especially the Polish, has certainly got us in its grip.

What is particularly significan tto me tradition is the rise to embrace new content in the latter half of the twentieth century, an initiative spurred by female poets such as Plath, Rich, Swenson, and Sexton.

I believe we are going to at long last recognize the ongoing achievement of contemporary American female poets. You can hardly call this a "school" or a "group," as these writers make up more than half of the population. Women writers have been redefining literature as we've known it for quite some time. The female writer in this country confronts a constant and enduring insult: she is "equal," yet she is not recognized. There's no other way to say this: women's poetry in this country is kicking some very serious ass. So, if you ask me, Look out. I'm no gardener, but I like to think some of the strongest plants grow in the shade.