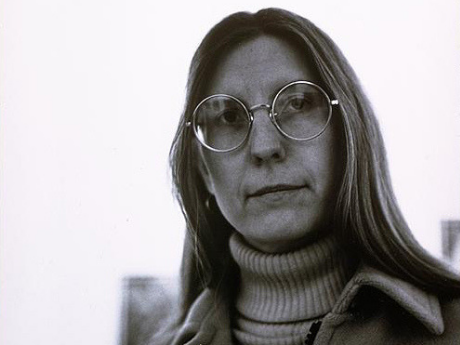 I use the figure of George Washington as my father, the "father of my country," to recreate my personal mythic self (THE GEORGE WASHINGTON POEMS, 1967). This mythic self is a particularly American self (THE MOTORCYCLE BETRAYAL POEMS, 1971). She is a "California Girl," (MEDEA THE SORCERESS, 1991) someone who embodies many of the traits associated with archetypal Americans: healthy, sexually explicit, involved with movies, the Western landscape of desert and ocean, loving gambling, independent and defining her individuality often through the landscape (WAITING FOR THE KING OF SPAIN, 1976). I also use the language that Whitman so characterized as "the barbaric yawp," not a poeticized language but one of hard and essential American speech (DANCING ON THE GRAVE OF A SON OF A BITCH, 1973).

I do think of myself primarily as someone writing out of Whitman, William Carlos Williams, Wallace Stevens, Robinson Jeffers, Gertrude Stein and Edna St. Vincent Millay. Equally important influences, however, were Garcia Lorca (in translation), Yeats, and Shakespeare of the sonnets.

I definitely wish to distinguish American poetry from British or other English language poetry. American poetry, like American painting, is always personal with an emphasis on the individuality of the poet. American poetry is always about defining oneself individually,claiming one's right to be different and often to break taboos. Distinctly American poetry is usually written in the context of one's geographic landscape, sometimes out of one's cultural myths, and often with reference to gender and race or ethnic origins. American poets celebrate their bodies, very specifically, as Whitman did. America may be a melting pot, but most American poets think of themselves as separate, different, and while very specially identified with some place in America or some set of cultural traditions, it is usually about the ways in which they discovered their differences from others and proudly celebrate them.

Whitman, of course. It's his tradition that embodies 1) common speech; the barbaric yawp, 2) flirtation with or flaunting of taboos, 3) identification as specifically Americans, claiming our peculiarities including place of origin, race, ethnicity, cultural customs, 4) celebrating one's body.

That is an old fashioned Euro-centered question. All great poetries and poetics are "regional" by that definition. American poets celebrate their differences (regional and otherwise) and almost always connect them to the bigger myths of the culture.

High and low culture come together in all Post Modern art, and American poetry is not excluded from this. In fact, American poetry might be in the avant garde position regarding an embrace of popular culture into serious aesthetics.

Personally, my view is that the American expatriate writers like Eliot, Pound and Stein brought more American tradition into European art than they absorbed. Eliot and Pound expatriated themselves because they preferred European culture, but were little influenced after their residence there. The contemporary European expatriates like Heaney, Walcott, Milosz in America are here because they prefer American culture (and money), and don't seem to be bringing their own culture nearly so much as absorbing ours.

From reading a previous answer, you know that I consider all those aspects to be part of American cultural myth and thus they figure into good American poetry, whether the poet is aware of what he is doing or not. I don't like political poetry, and I don't write it. If this question was pointing towards that, I think it is missing the point of the American tradition, which is always apolitical, even when the poetry comes out of politically active writers. This makes us very different from, say, Latin American writers.

Probably, but I've never been tested.

Bad ones. Horrible ones. Destroying the language consequences. Still, language is resilient, and poetry when it is pressured simply goes underground. The most probable effect will be that lots of bad poetry will be published and celebrated (by people who basically hate poetry) during the next decade or so, but this will not stop the good writers, and all of a sudden in about twenty years the PC stuff will go away, and we will find that there has been an entire generation of interesting poets writing, not in secret, but without much attention or perhaps even not well-published. PC stuff just lowers the general acceptance of good work and replaces it with bogus poetry that celebrates values that in themselves are probably quite worthy.

At the moment I have no predictions other than that the 21st century will recognize the 20th century as a Golden Age for American poetry. Possibly, that means a lot of imitations?