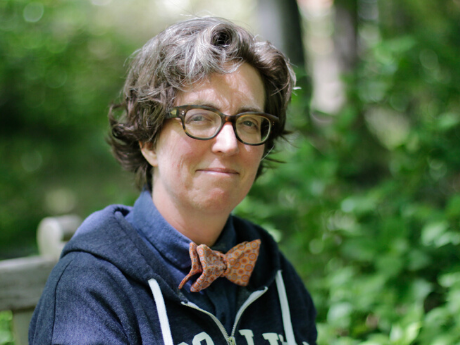 I grew up in the movies. Well, that's not entirely true. I grew up in a family that owned movie theaters in a few small towns in Connecticut. We owned a drive-in and a second-run theater. The highway came through and a Cineplex moved in and that was the end of that. No more sitting on the hood of the car in my pajamas watching beautiful women get kissed up on the screen. No more free popcorn and 50-cent films. Just memories of those things, which is to say who knows how true any of it is. Like Bishop said, "I liked the place; I liked the idea of the place." It sounds so American, the picture I just painted. How could something like that even be true?

But it is. Or it's what I remember. It's one of the things I talk about at readings and lectures when people say, "Your work is so American" without necessarily articulating what that means. The assumption being that I know what it means and that I am that thing. An American poet. Well, I suppose I am. And by that I mean I am someone who grew up in one place and dreamed of living in another. When I watched those movies or the soap operas my mother loved I saw a whole world of desire and fulfillment that seemed impossible in the small town I lived in. So I began to construct a world in my mind, a sort of movie where all those beautiful women waited for me and the light looked like it does here in Los Angeles where I'm answering this question. I built narratives of escape and occasional violence. I imagined myself inhabiting various bodies and speaking in multiple voices. I look back at it now and realize I was learning to write poems. I know it sounds like I was learning to write stories but really I was learning to push against and work with silence, which lies at the heart of my poems. All of those dreams I had were a way of countering the reality that my mother was mentally ill and desperately poor, that I lived in a town where being gay or different in any way put one in very real danger.

Like many poets at the start of their writing lives I was so caught up in received ideas of beauty. I couldn't imagine that the tobacco fields and power plant and boys driving by in their trucks and throwing their sodas and God knows what else at me could be worked into something beautiful. And so for a very long time I wrote well-meaning and profoundly flat poems. I wrote poems that didn't sound like my life at all. And then I think I let myself do something that might be best categorized as "American." I decided to go past the edge of the poetic village I'd made for myself and into a more dangerous and uncharted place where I laid my received notions of beauty aside and began to work with what I actually had. I had the stories of a circus fire that haunted me. I had the memory of driving past the adult drive-in and watching the women up on the screen. I had the memory of the football players sitting on the bus with girls on their laps. The images rose like movies in my mind and then I had to make something urgent and necessary out of them. I had to find the place where those voices overlapped with my own. And how that could be a key to pushing into the unspeakable.

I'm not saying it is exclusively American to do these things but I do think there is an audacity of belief in one's ability to make something out of nothing that is deeply rooted in American identity. I live in Los Angeles now. The intersection by our house used to be Louis B. Meyer's airstrip. Before that it was an orange grove. Before that it was the desert. Someone kept reimagining it. The place and then the idea of the place. That's the country I come from.