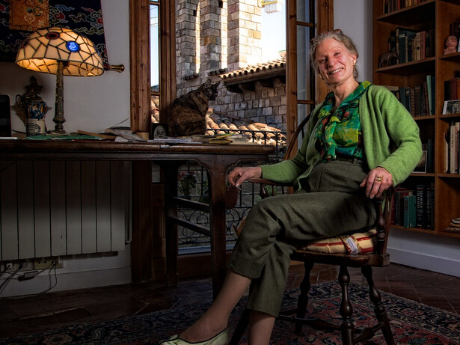 Certainly in language I consider myself American. There is an American slang and colloquial expressiveness which it is important to incorporate into poetry, which is part of what makes it American poetry.

No, I think of whatever poets writing in English that I know- Indian, Australian, Canadian, English.

Definitely. American English has its own rhythms and usages, distinct from other English speakers. I was recently in India where I met and spoke with a number of Indian poets. Their use of the language is neither American nor English.

They are a part of their own traditions but are as well a part of ours. English is the language of the world at this point in time and has more flavors than ice cream.

I am more likely to read a contemporary non-American poet writing in English but I can't defend that practice.

Certainly gender is of great importance to me in my identity and it may, indeed, be of more importance than nationality.

It might take more than one poem, but I do think I would be able to distinguish.

It flattens it out. When I was a child there were lots of dialect poems which were read by ordinary, modestly educated people. These were not bigoted poems, just poems which noticed the differences in speech between immigrants. They were frequently funny because of the interaction portrayed between immigrant group. Political correctness takes the flavor out of things.