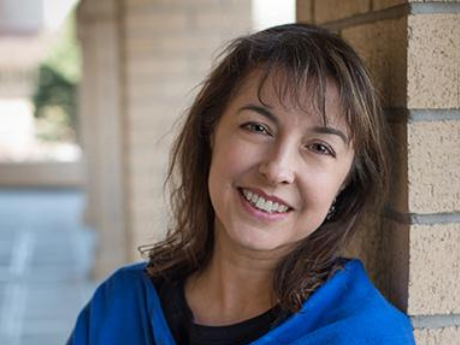 Breath is my first language, "American" second. I am a U.S. poet only now and then—when work spins out to engage some nation-high power. Do I foresee a day when poetry will be judged not by the color of its skin, but by the content of its characters? ¡Ojalá que no! I don't wish to be post-Latino and sans history.

The next century will see the flowering of a form already well into its development—the extinction elegy. Poetry will have to mourn species, whole communities of plants and other beings, and remembered places lost—both human-built and otherwise. But the poetries will live, and further generations may have to muster a post-elegaic tone, as they take stock of what persists and lives anew.

As a girl in Bay Area book stores, both American Poetry Review and Poetry Flash, usually stocked on child-high shelves, taught me poetry's role as strong and vital thread in the culture-web. Well before I was of an age to deeply care about grown-up writing, APR impressed me with its full-page cover portraits of living poets, women and men captured with their eyes a-glint with invitation and mystery. And the tidy event-listings in the Flash, along with their snappy ads—more my reading speed, at the time—were proof that poetry swirled aloud all around the coast range every night. How lucky I never had to wonder if poetry meant anything to anyone in this country!

But what did it mean to me? The works of my graduate-studies mentors remain among the wellsprings of my sense of possibility for how mestizo identity, feminism and femininity, and ecology can stream into 'merican poetry. Specifically, Gary Snyder's Mountains and Rivers without End, Sandra McPherson's Streamers and Francisco X. Alarcón's Snake Poems continue to light my way.

A pan-American, Turtle Island poetics exists when certain touchstones shift into self-evidence: that we think of words like "contact" and "Columbus" as the fulcrum between "pre-" and "now"—that the Popol Vuh, born from the hemispheric navel of this world, is variously known and erased in splotchy patterns up and down the landmass—that syncretic, dark-skinned images of the Blessed Mother are widely revered and are evidence of both our endemic spirits' adaptabilities and the hardiness of goddesses to withstand and live beyond forced passage—that we have many calendars, many old and new ways of counting Time—political independences and their attendant disappointments—the surface preponderance of Spanish and English, beneath which churn multitudinous living tongues—the Sor Juana sonnet, and the image of Sor Juana as the lone woman poet on any major national currency (MX!)—the many migrations, religious conversions, diversions, aversions, or versions of resistance to spiritual erasure, keeping our poetry tapped into the shifting Great Beyond, the shifting Great Here—the vast difference in island-consciousness between island-dwellers and others—and images of our western and west-coast mountain ranges as sites we are bidden and forbidden.

Not an exhaustive catalog, but a start!