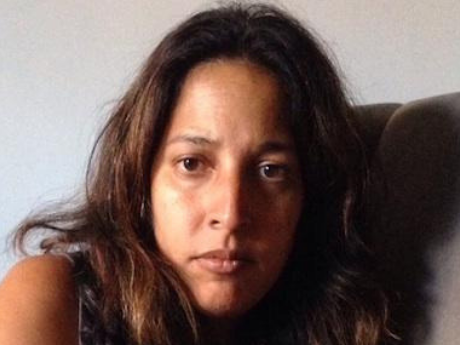 This is either a really easy question or difficult. I've never thought of myself as anything else, except when I have to further define and call myself Asian American, or someone else calls me an Asian American poet. Or an Indian American poet. Historically, whenever I've been told I'm "American," it's been a gesture to erase my self-identified racialized ethnicity. You are American.

I like thinking about the traditions that make up the contemporary landscape of poetry and art. Certainly, the exploration of and the possibility in breaking with tradition seems uniquely American— especially in thinking of Whitman and Dickinson, but then in contemporary poetry there is a confluence of aesthetics both inside and outside the academy that's exciting and may be working this same radical way it has in the past. I am pretty amazed that I can read Amiri Baraka/LeRoi Jones and the turn to Elena Georgiou's Rhapsody of the Naked Immigrants, and through these two books and many others find a freedom in the exuberance of contemporary poetry.

Additionally, this exuberance is something I took for granted in New York. Leaving New York and teaching in a creative writing MFA program, there's sometimes too much seriousness in art-making and less of the O'Hara "going on your nerve." And it's hard, in rural white environments to be a stranger. I have to ask myself whether my work is-- or can be read-- in correspondence with Richard Hugo's work now that I live here in Missoula: is it working against or with his traditions, say for example, writing about the natural world and/or place.

And I think my role changes based on where I am. For me ethnicity, gender, (dare I say height?), class, and religious (I'm a relaxed Hindu) beliefs have all been a major factor for me. Ethnicity, gender, and class have had a deep effect on my work. The more I realize what upward mobility has afforded my family and me--my family came here from India with $200. While my father landed a visiting faculty position at MIT, it wasn't enough to support his family, so he worked as a security guard in the evenings at the Museum of Fine Arts. He had experienced profound discrimination the higher he went up in the Academy. This is something I will forever be aware of in relation to my own identity. I'm a short, brown woman running a program and teaching in the academy in the deep West.

The multiple poetic turns and phrases.

New art and film excite me.

I guess I'm still thinking about this and where I am and what I teaching change according to what I feel is missing around me. I think my list of Americans is infinite and changing.

Hmm. Predictions. I think older and ancient work will start looking extremely innovative—if it doesn't already—to the next several generations of poets.