Stopping by with Anna Deavere Smith 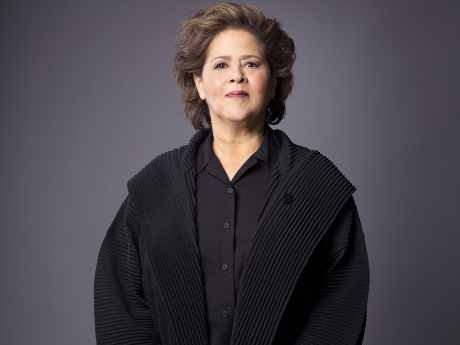 Anna Deavere Smith is an actress, playwright and teacher. She is known for creating a new form of theatre based on interviews, and in which she portrays multiple real people. She's the recipient of a MacArthur Award, two Tony nominations, the National Endowment for the Humanities Medal, the Dean's Medal from Stanford Medical School, and others. She has been a cast member of TV shows such as Nurse Jackie, The West Wing, and For the People. Her books include Talk To Me and Letters to A Young Artist, as well as printed versions of her plays. She is a professor at New York University’s Tisch School of the Arts.

I am always moved by Ella Fitzgerald—as much by her excellence as by what she sings. I am also moved by the music of Max Richter, no one album in particular— I've always been interested in and moved by music that is repetitive and builds. I suppose that comes from my youth in the black church where many of the hymns had repeated lines and refrains. You couldn’t find two more different kinds of music, but there you go.

Dibs in Search Of Self, written by child psychologist Virginia M. Axline, is an excellent portrait of a relationship between a child and a caring adult other than parents who changed his life with patience and imagination.

That is a very difficult question because there is no "everyone" in America. The country is so divided culturally and politically. Some suggestions:

Notes on the State of Virginia by Thomas Jefferson. We see the seed of problems deep-seated in origins. Some chapters will shock, alarm, and distress readers, but I think we have to see the root of problems to fix them.

The Constitution of the United States.

Jacob Lawrence's The Migration Series. Very beautiful, humble story of America through the lens of African Americans on the move.

We can't go to any theaters, and there are many in New York City. I don't believe I have a favorite theater or concert hall in New York. I miss them all. And I love going to En Japanese Brasserie in the village. The owner has become a friend, and I like to visit her restaurant in NYC and the one in Los Angeles. I also miss my swimming pool and the gyms I go to!

"I know I'm ready to write when I'm fretting about something." —Toni Morrison

On the doorway, in any elementary school where the principal will personally tack it to the door and spread it through social media.

I have not thought differently. This moment is in the tradition of protest poetry and art that goes back centuries. I hope that this pain will lead to beautiful works of arts.

I am working on things, but I don't talk about what I'm working on because it makes me think I've done more than I have.

Stopping by with Kim Addonizio