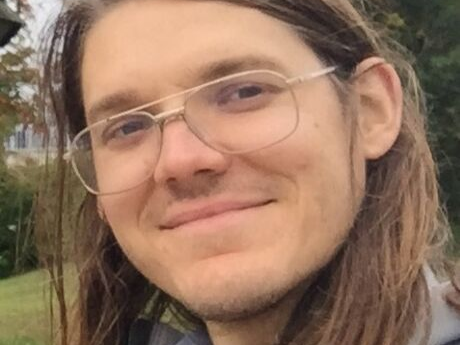 One way to introduce this posthumously released book by the beautiful enigma of Mark Baumer is to say something about how, as he lived, Mark was the writer most possessed of freedom—pure, uncompromised creative freedom—that I've probably ever read. By this I mean that the body of work he was able to produce in his heartbreakingly short time on our planet operated rigorously and overflowingly in a matter of vision unbound by convention, expectation, structure, theme, much less awards, credits, recognition; I mean how in everything he ever wrote, whether about vegetables or capitalism, office work or walking barefoot across America, from one word to another absolutely anything might happen, any inanimate entity might find a voice, through any word; to the extent that, from the outside, it seems the work of a child genius, where by child I mean the kind so unaffected by the arbitrary canonical rules that, like Barthelme or Kharms, it seems to describe a version of the world so innately absurd, so blissfully unbound, that many more restricted readers might receive it, one might say, only as might someone looking out through the security grid of our luxury panopticon at a far off and spectacular horizon slowly receding across the wide and darkened land, hearing an old friend's voice somewhere way out there in the receding gradient, saying it's okay, you will wake up soon, I am here.

Mark himself might be embarrassed by my attempt at saying this; or, rather, he'd probably just look back blankly at where the words came out and start saying something about food, but then stop himself and be silent. For someone so full of vision, he always carried grace, knew when to let a moment think. Later, in a blog post on any of the countless internet locations where he published and self-published throughout his life, he might write of the experience, "An electric toaster said, 'I believe in freedom,' and then ate so much money it fell into a coma on the longest day of the last new year." That is my poor example of the methods of casual absurdism by which Mark lived his exhaustive ongoing project of unmasking our most flat and blank realities, to reveal beneath the guise of the everyday the unrelenting sprawl of wonder and comic horror that links us all together in a human project no one understands, much less survives.

It's no sort of hyperbole to me that when Mark was hit and killed by a negligent SUV driver in Walton County, Florida, in January 2017, the quotient of America's cumulative emotio-imaginative capability tipped below the holding point of modern stasis we've been living under all our lives. Only those who knew Mark at all could still detect this, despite the countless other warning signs, the sicko headlines streaming by the second through the skin that barely holds our faces together. Suddenly there was no one left to catalog the whereabouts of our meows, an intentionally impractical term Mark employs in the short, strange book you're about to read as "a complex mixture of nonvolatile substances of large mass, present in small numbers, along with volatile odor compounds which are small in mass but present in large quantities." It's okay not to have understood that, to have let it wash past you, perhaps to have read it over and again searching for mythic meaning. Like so much of Mark, it's hard to know what to do with the data derived from such supposedly surrealistically intermingled information in the present because it's from the future. It works on paper like a dream, or like a drug (another less than ideal analogy considering Mark was lifelong straight-edge, though also true in how novel language offers temporary psychological change); and still, its essential kernel contains the very sort of empathetic drive that made Mark's work feel at once so random and so alive; by example, it shows one how to see the world and all the strangers in it not as things to be feared, but to be astonished by, over and over, until the fact of existence in and of itself becomes as ridiculous and arbitrary as any trip to Whole Foods, or any corporation's efforts to appear human; or, most of all, as any sentence's desire to predict sense.

In this context, what remains of Mark and in the thankful mass of language his human body has left behind is a display of overwhelming unobstructed love, another word we often misplace the meaning of, but herein felt inexplicably in MEOW 's shapeshifting narrator's frank descriptions of one's dentist finding "comfort and peace in rubbing his fingers on teeth" while "as soon as one of his hands reaches inside a person's mouth" simultaneously being "able to recall their entire dental history"; love in writing a novel or series or whatever this is that begins, "Hey, it's Bobo, the pregnant meat-eating bear," and then never mentioning Bobo again after that piece; love in challenging one's self to learn to see the world in a way that no one else would have the heart for, even in darkness; in throwing one's self into the impossible, because you can, because what else is life for but such wonder.

***
a poem from MEOW by Mark Baumer