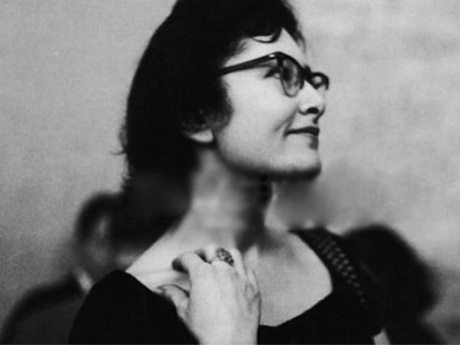 Hard to believe we met about fifty years ago in New York, when she and Mitch had first married and she had returned from Europe with him in the classic manner to start her own life over again. Certainly as a poet she had to. The distance between her first book, The Double Image, and the second, Here and Now, published by City Lights in its Pocket Poets series ten years later, is a veritable quantum leap. Kenneth Rexroth, editing The New British Poets for New Directions, thought her most able and, when he saw her, declared her Dante's Beatrice incarnate. W. C. Williams, writing of "Mrs. Cobweb" in Here and Now, said that one can't really tell if she's utterly virginal or if she has been on the town for years and years. Everyone was intrigued!

Was it Denise's long training as a dancer, when she was a child, that gave her such particularity of movement--her phrase and line shifting with the fact of her emotion, the rhythms locating each word? In a sense she was a wide-awake dreamer; a practical visionary with an indomitable will; a passionate, whimsical heart committed to an adamantly determined mind. It wasn't simply that Denise was right. It was that her steadfast commitments could accommodate no error.

I remember, when we were neighbors in France, riding our bicycles in Aix from the villages we lived in just to the north. There was a week-long celebration of Mozart. Denise's bike lost its brakes at the top of the three-mile hill into the city and down she came, full tilt, careening through early evening traffic, to come to rest finally at the far side near the railroad station. Was she terrified? I recall our going to the concert—so seemingly she soon recovered. Balance, quick purchase, passional measure rather than didactic, mind an antenna, not a quanitifier merely. Her voice was lovely. Her laughter, particularly her helpless, loud giggles, were what finally must define "humanness." Her whole body took over. We used to sit out at the edge of the orchard near her house in Puyricard, rehearsing endlessly what it was Williams was doing with the line. We were fascinated by how the pace was managed, how the insistent breaking into of the grammatically ordered line made a tension and a means more deft than any we had known. That bond of recognition, shared between us, never lessened.

Back in the States, then to Mexico, as I also shifted about to Black Mountain--then to New Mexico, Guatemala, and Canada—Mitch's and Denise's son Nick grew and grew, as our own children did. Thanks to Donald Allen's The New American Poetry (with Denise ostensibly the one woman of Black Mountain's company, despite the fact that she never went there, even to look), we began to have a public condition, as they say. The Vancouver Poetry Festival of 1963 and the Berkeley Poetry Conference of 1965 were the greatest collective demonstrations.

Necessarily the Vietnam War and its politics bitterly changed our world. Insofar as that determinant in Denise's life is a solid fact of the period's history, there's no need now to rehearse it. I was closest to the poems of The Jacob's Ladder and O Taste and See. Repeatedly she found voices for our common lives.

Years passed, of course. We saw one another all too rarely and yet her presence, her stalwart integrity, were always a given. Work to offset the world's real ills became an increasing occupation, forcing a more generalized community, on one hand, and also an increased singularity as her son moved into his own life and she and his father separated. She has written poignantly, healingly, of this time.

Now and then we would intersect on our show biz travels, once in Cincinnati, then a few days later in New York. Finally we were together at a Poetry Society of America awards dinner--we'd been judges—after she had moved to Seattle. Nick was with her; they were both solid and happy. There was always much I wanted to talk to her about—[Robert] Duncan, for example; my own confusions; the life I now lived with my family; the increased rigors of teaching. But we no longer seemed to find time or occasion to write. Last fall at Stanford, I got the news from friends that her cancer treatment seemed to have gone well. She had visited just a short time before and appeared much better.

Then bleakly, irrevocably, she was dead. No more chance to talk except in the way one finally always had--in what she wrote, what one had hoped to say, what one remembered.