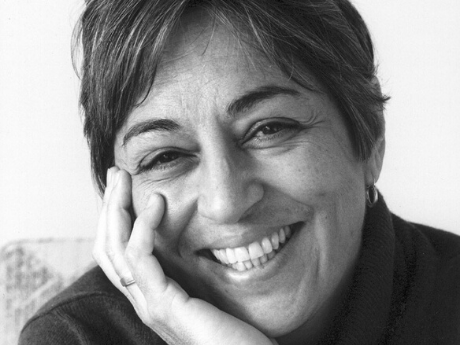 How much like
angels are these tall
gladiolas in a vase on my coffee
table, as if in a bunch
whispering. How slender
and artless, how scandalously
alive, each with its own
humors and pulse. Each weight-
bearing stem is the stem
of a thought through which
aspires the blood-metal of stars. Each heart
is a gift for the king. When
I was a child, my mother and aunts
would sit in the kitchen
gossiping. One would tip
her head toward me, “Little Ears,”
she’d warn, and the whole room
went silent. Now, before sunrise,
what secrets I am told!—being
quieter than blossoms and near invisible.

From I: New and Selected Poems (University of Pittsburgh Press, 2019). All rights reserved. Reprinted with the permission of Toi Derricotte.

Toi Derricotte’s influence on poetry engendered in subsequent generations the understanding that vulnerability to our work is the ground from which our poems can grow. Since the mid to late 1970s, her writing speaks straight out of the mirror to convict us: and only because she’s cultivated first the language necessary for her own conviction. Telling the truth is one thing. Speaking truth to power is another. Derricotte’s thing is neither. She speaks truth to the power of inertia within the self, the inertia that allows us to lean on lies—like white supremacy, America, and patriarchy—in little daily ways. These poems, then, are prayers, appeals to the higher self for the integrity of the whole self in the bedroom, in the boardroom, and “in the little light of glad living in my eyes.”

Toi Derricotte’s courageous and tender poetry has been an unprecedented lifetime journey into black/whiteness and womanhood, a post-confessional disinterment of the generational trauma rooted in the original wrong of U.S. history. That she has been able to transform personal pain into insight and wisdom is a triumphant achievement. And her spiritual mothering of the new generation of African American poets has freed them, as she describes in a wonderful poem called “unburying the bird,” to see the sky.

Toi’s words banish shame and head north, freeing souls. Awed by the bloom of her wounds, her brave revelations have allowed us to unearth and make peace with our own. We are blessed to know her exquisite eye, the black taffeta and burlap of her tongue, the sweet echo of her hard-won laughter, the mega-generosity of her spirit.

Toi Derricotte is one of our greatest treasures. It is impossible to quantify what her body of wide-ranging, astounding work; her service to global letters as professor and institution builder; and her fierce, encompassing light has gifted us. It feels inadequate to just say I'm grateful. But I know I'm not alone in my gratitude. She’s given and continues to give so much.

My initial temptation is to speak to the wonder that Toi Derricotte, through Cave Canem, Inc. helped create a wave that allowed poets of varying backgrounds to be seen, to be read with seriousness, and high regard. But frankly since reading the poems in Captivity, I have, first and foremost, longed cherished Toi’s poems, some of the most tender and fragile we have in American poetry. They taught me how to hear what is hidden inside and courageously write toward that. And this: she also once indignantly told a brash, one-dimensional me, in my youthful quest to master “craft,” that problematic word I ill-advisedly invoked during the last workshop of the first Cave Canem gathering: “Major! We have to craft our emotions, too, in poems!” I have been reflecting my whole life on that notion and its implications. Along with her fierce and brave poems, I thank her for that moment of brilliant provocation, which she has ferociously and beautifully modeled in her poems and prose.

Toi Derricotte invites us to the center of the heart through poetry that asks us to listen, care for, and understand others by first sitting with ourselves. To face our own i—and all that we are afraid to acknowledge there—is the hard poem we must embrace. Toi creates space in the world through the power of the word to show us we can do this, as difficult as it is at times, and live in the beautiful joy and challenges of it all. Toi's poetry guides us through this thing called life with the gentle power of a tender spirit with exceptional literary skill.