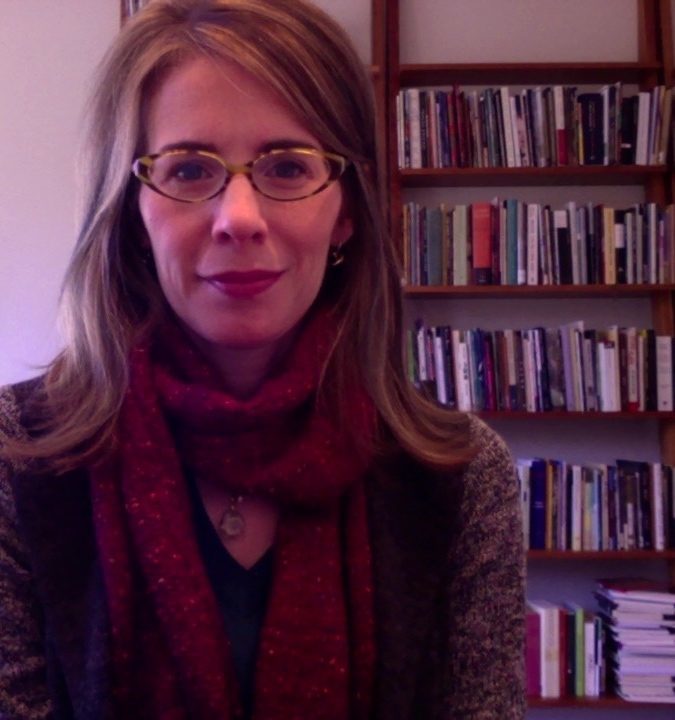 They are not in season. Nothing is
in season. It's December. The oranges I couldn't resist
at the market, their extravagant glow, trucked in,
the green beans, trucked in

[extravagant
from the Latin, outside of + to roam].

I set the beans aside in the sink for rinsing, then
pull away the pliant skin
of one orange—

Out the kitchen window, winter has had the last word
with the songbirds and the gardens. Night begins
to drag over the sky.

While I complain about the city not plowing
my street after a foot of snow,
the glaciers calve,

It is winter there, too. I have seen the photos
of the little girl in her fuchsia coat,
whose color reminds me of the bougainvillea
that grew outside my last kitchen window, spilled bloomagainst the plainsong snow.

I think her mother's bones must heave in their sockets—a pendulum
slowing—one way          then the other
toward the curve of a tiny apricot cheek, then
toward the open mouth

A city unroofed, ungardened.
Unbodied. A city becomes a ruin

And people send their epitaphs
skyward, prophetic
bits and bytes pinging down
through the star charts, blinking

on a small screen I've set nearby on the counter.
I pick it up to call the city about the snowed-in street and—

help us
they are dancing on our bodies

street. Tonight the whole world stands by and I stand by
the sink, snapping off the tapered ends of beans I'll feed to my children,
six-thirty sharp,

then snapping them in half—tell me, how can I not

and in half again.

Like small suns, the oranges flare
in their bowl on the counter.

It is easy enough to salt the beans
with my unearned tears.

Easy enough to remember holding
each orange in my hand at the market, saying,

These are as big as a baby's head!
Putting them in a plastic bag,

When I first read "Interior with a Woman Peeling Oranges, Snapping Beans," I was reminded of something James Tate once wrote: "What we want from poetry is to be moved, to be moved from where we now stand. We don't just want to have our ideas or emotions confirmed. Or if we do, then we turn to lesser poems, poems that tell you killing children is bad, chopping down the rainforest is bad, dying is sad. A good poet would agree with all of those sentiments, but would also strive for an understanding beyond those givens." This poet does just that, masterfully reworking the images of the oranges ("flesh broken" and "as big as a baby's head!") and beans ("how can I not/ think of finger bones"), and crafting stanzas and lines that enact the brokenness at the heart of the poem. The power of the poem is how it grapples not only with the horrors of Aleppo but also with the complexities of watching those horrors happen "on a small screen," knowing that:

everywhere but not to me.

What is the speaker's—and our responsibility? "Interior with a Woman Peeling Oranges, Snapping Beans," reminds us of our shared humanity, yes, but it doesn't use a flattering filter. It implicates the speaker—her "unearned tears"—and by extension, all of us. This is a poem I need in these strange, fraught (and always-televised) times.