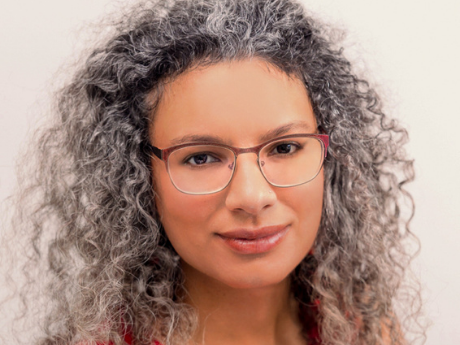 Lauren Russell is the 2021 recipient of the Anna Rabinowitz Prize for her book Descent (Tarpaulin Sky Press).

The Anna Rabinowitz Prize is awarded for venturesome, interdisciplinary work made in the previous year and combining poetry and any other art or discipline.

It was incredibly difficult to choose from this year’s entries, which spanned from Instagram dance performances to electroacoustic poetry compositions. Some works engaged the pandemic directly and tangentially, and others directly addressed Black Lives Matter and elevated the importance of queer, trans, and BIPOC liberation. While the following pieces were not chosen as the winner, I do want to highlight them for their artistry and encourage everyone to seek out these works and the artists who created them:

• Shin Yu Pai for Ensō, noted for its elegant collection of the artist’s interdisciplinary poetic projects collected and undertaken over time;

• Nova Cypress Black for “somewheres: a world in progress”, noted for its choreography and imagination of Black queer other-worlds;

• Christine Gardiner for Pet Murmurs, noted for its investigation of trauma through a web-based lyric memoir;

• Gabrielle Lamb for “keeping_it_whole” (Instagram), noted for its creative use of Instagram and choreography of dancers in response to Mark Strand’s poem “Keeping it Whole”

• Sammay Dizon for “Hinga”, noted for its choreography and amplification of the Bay Area’s Filipinx community and the legacy of activist Amado Khaya Canham Rodriguez;

I would like to note an honorable mention for Tracks of My Tears by JoAnne McFarland, for its creative use of archival material, poetry, pacing, and animation. The result is a compelling reimagination of poetry and the book itself.

There was one project, however, where at the end I had a small weep, and this was Lauren Russell’s Descent, this cycle’s winner. As “a work of biomythology”, Descent writes with, through, and against the blank interstices of the archive that act as a portal between the author’s origins in the history of both slaveholders and enslaved peoples and their present moment. These archives, and the absence of recorded names and agencies, are open only to what one imagines they could contain. By focusing on these “afterlives of property” (Sharpe), Russell bathes light onto her ancestors, the Black mistresses who were recorded as property and mothers of mix-raced children and attempts to imagine their lives independent of those who enslaved them. That the archive is at once richly full and empty tugs its way into the author’s present; a present marred by contemporary anti-Blackness, internal & external racism, and a palpable exhaustion and social aloneness that emerges from the confusing tethers and entanglements with such history. It is a project of personal historical documentation that has resonances for many in this country whose Black ancestry comes from the enslavement of Black people. Part lyric memoir, poetic exploration, and archival research, Russell’s Descent enacts the wake of Christina Sharpe’s wake-work where “the past that is not past reappears, always, to rupture the present.”