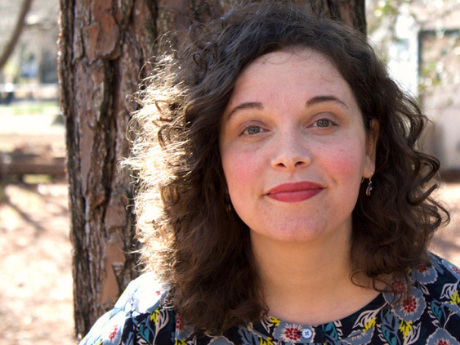 I thought I should tell my sister not to
go there again, never go there,
our grandfather dying
of some disease that makes him have heart attacks
in winter, the thick plastic sheeting over every
window, such meager
light in those rooms and you can’t
see out, our uncle burning
through his liver and crashing everyone’s car, whole family
squatting in that slumped house full of
newspapers and ashtrays,
the ceiling tiles falling, porch steps sinking deeper
every year into the ground, and our brother glowing
with a terrible manic fever
or sinking, too, or making
stilted amends or angry we weren’t there to nurse him
through the last fever.

But I don’t say it—don’t go
home,
and she goes,
makes that northward trudge, past all
Starbucks, all Targets, past interstate highways and also
the hope of ever
distinguishing herself from the soil from which she
sprang
or crawled or never
fully crawled, and this time Dad
tells her two things she calls to tell me.

One,
when they were preparing to eat the new potatoes and peas
that are maybe most of the reason
my sister visits at all—that tenderness, that mouthful
of sweet green,
like going home but without the pain, or with a little less
pain—and she was looking for a spoon,
my father said I’ll have to wash it.
There’s only one. Your brother
used the rest to cook his drugs.

Two,
a boy of seven,
buttoned into his good shirt, pants ironed, our father let
the music spin him in the center of the school gym,
shedding
twelve toothaches and failed scout badges
and his father’s
unaccountable rage like spare change flung
from his pockets, and then he went home
good-tired
and still too buoyant to sleep, so he stood just inside
his bedroom door, listening to his parents
in the hallway ask his older
sister How did he do at his first dance?
and she said He looked like a loser, and that’s why,
our father told my sister,
he never danced again.


And still I don’t say it—never
go home—because what about the front door
always unlocked, damp boxes
of rubber dolls and crayoned
drawings, a whole basement full of years
and years and days, same basement where the uncles
working on the cracked foundation found
a jar of buried cash, hundreds
of disintegrating dollars some government agency had to
microscope together,
send us a check that kept us in
fuel oil and hamburger meat for months.
And the photo albums
blooming mold there in the dark—me
bathing in the sink, my sister with her eye patch
in the arms of the mother who left
those photographs behind.
What about the few blessed days after snowmelt
when lilac mixes with the scent of mud
and you can only think
new, new?
You can only believe we’ll be reborn together
somewhere else
somewhere easier to breathe but the air
still smells this
sweet
What about that money dust—our inheritance
finally unearthed—and the way we
dig in, the very ground
beneath us a lottery we can’t not play?


Poem originally appeared in Poetry. Reprinted with the permission of the poet.

These poems reveal odd congruences—nothing goes unopposed or unhands its opposite. Even sweetness (lilacs, a boy dancing) any tenderness is met with the threat of violence. Like the America that is driving the poet into a thousand plus day headache, every offering is met with a bite or the possibility of harm—flowers as dog teeth about to bite. The tumble of this poet's language stayed with me and drew me back to a life sprung from poor ground, sistered to addiction, and yet determined to live in love for the duration.

In “Little Deprivations in the Big North Woods” the poem’s structure, based on a call with a sibling, holds effortlessly. Neatly done! Inclusion of what should be a shocking bit of comment about all the spoons but one used to cook drugs deepens the poem so that we hang on through anecdotes that finally reveal how deprivations as well as treasure made this family. Each poem has a similar control.

I especially like the poems about love in midlife hold humor as aphrodisiac and are a new kind of metaphysics. I cannot help relate to the subjects of origins, family, married love, grown children, but beyond them there’s a confident poetics, the speaker’s fully thought out role in the world and an explanation of it as grown in place and people. These poems could feel like what we expect at safe middle age, but reckon instead with how little security we have, every one of us.