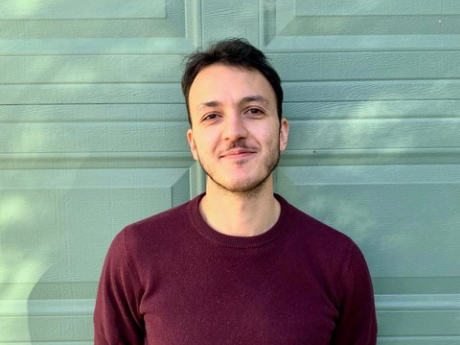 Waking to the sound of rain above
hissing like static from a cloudy screen
I reached to turn it off, thinking that we
had drifted off again like ships at sea
until the channel that would always stream
late-night reruns of censored melodramas
followed by a flag-and-anthem sign-off
crashed into the “snow,” jolting my dream-

drenched body back into its pajamas,
and then shrunk down into a single drop
when I turned off the set and shut my eyes
and had already sunk back into sleep
before it too could drain into the gap
at the black center where our faces shone.

I kept returning to “Snow.” Each time, a new thing revealed itself, and yet the poem grew more resistant to being locatable. The about of it is simple enough: at the end of the day, a flag on TV, the national anthem, then snow. But whether that is happening now or the memory of it is, whether the rain is confused for it or it for the rain—well. It is immediately recognizable as a sonnet, which, here, is a closed form naming the closed system of enforced nationalism. Within it, a sentence snakes, with a music regular and not. And this is one of the many things I admire about this startling poem: it seems to behave and yet evades. There is a hard volta, yes, and it splits the waking and the sleeping, the here and the elsewhere, the now and then, but only in its moment of pivot. The lines between dream and screen and streams blur, as do the sounds of rain and memory of pervasive, Pavlovian nationalism. I don’t know the country, but it sounds familiar—a practice carried out in the US even up until just before I was born, this melding of allegiance and media. This is a poem of subtle reversals, a sentence as Escher’s stairs, brilliantly fitting for the lived sentence it describes.