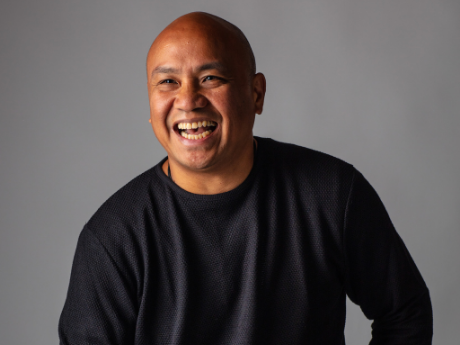 The Changing Hymn (Allegory of the Singing Lover)

Sometimes short on rent my love
would sing for quick money
in big beautiful halls      crystalline and sad
where the people were also sad
for their ties were always straight
and their clothes were well pressed
and they dared not scuff the good gleam
of their belt buckles—that kind of sad—
they were so rich with the wealth of silks
and platinum garland and fast boats
The marble floors of their salons
so clean you couldn’t tell a single
blade was put to wood
or that a drop of blood had fallen
on their shiny tiles
No evidence
of the making
but by god
when my love sang every one of these
bright-buttoned folks would sway
barely budging at first
so you couldn’t notice the ghosts
stirring inside them
like a sugar starting to cook
into its first kick of liquor      swirling now
nudging them like a sweet inner fog
They tried (Oh did they try) not
to let the rhythm in      They gripped
the tables’ silver in their fingers
and curled their toes inside their shoes
And just as the music got into their stiff hips
their bodies relented      It was then
my love would begin to fit new words
to this familiar tune       And clever
she would hide me inside the song(!)
maybe just the crook of my neck
or the pink scar across my forehead
(which she’d touch to calm me
when I was sick) Sometimes
she’d smuggle into the song
my busted up pinky      my bruised feet
or my father’s piano      And I would laugh
even louder when the coiffed ones laughed
so hard and loose they seemed
to be breaking all their great grandfathers’ rules
for even the powerful understood
the power of what’s hidden
how a woman’s voice of wild harps
and charging horses was guiding
this monster of a song inside them
while all us savages and outcasts
rode stowaway tucked into the tune
with all our fists and all our feet
and all our sweat and grime
soiling their powdered armpits
and fancy panties in public

Reading Patrick Rosal’s The Last Thing: New & Selected Poems is an embodied experience; these poems jump off the page with a muscular exuberance. You can hear their raw emotions singing in your gut, and feel their language in the sway of your limbs. These are poems that aren’t afraid to pitch their bodies onto flattened cardboard to pop and lock and spin, creating a new vernacular as they go that’s kinetic and visceral. “Shame / is like you’re made / of 10,000 beautiful doors // and every day / you try to keep them / all / from flying open / at once,” he writes in the title poem, and The Last Thing contains over two decades of poems—not only Rosal’s greatest hits from Brooklyn Antediluvian (2016), Boneshepherds (2011), My American Kundiman (2006), and Uprock Headspin Scramble and Dive (2003), but also 60 pages of new work that cement his legacy as a virtuoso poet who creates banging standalone showstoppers.

And while each poem in here is its own self-contained world, having them proximate between these covers allows the breadth of emotion, language, music, and range of Rosal’s forms to shine—the elegies and love poems, odes and narratives, laments and hymns, aubades and kundimans, prayers and letters and incantations, call-and-response, parables, and lists. We move from America to the Philippines and back again, through the streets of Jersey and Manhattan, with poems that bring the world into them to push “the fluid boundary between storytelling and song,” as Rosal writes in the stunning preface, which also meditates on oppressive systems and the nature of poetry as a language of resistance. Rosal is a poet who is unafraid of emotional imperatives and is as attuned to justice as he is to the breath and integrity of his lines. In “Bienvenida: Santo Tomás,” he tells us, “Sometimes / we have to sing just to figure out / what we cannot say.” Rosal’s is a poetry of grief and loss, survival and perseverance, as much as it’s a poetry of ecstatic joy and humming eroticism. I chose this book because it moved me immeasurably.