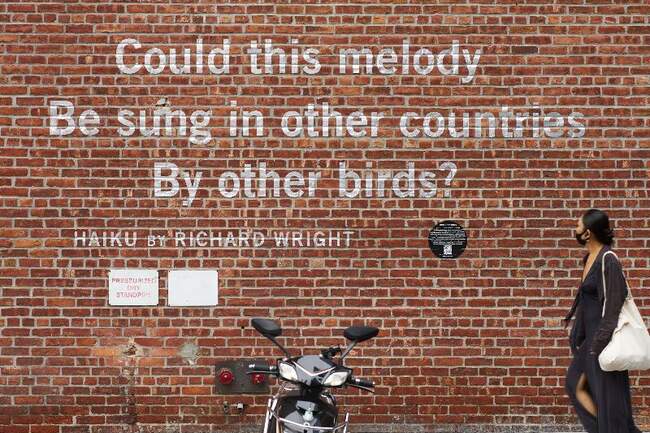 The tour will begin at the Shake Shack in Willoughby Plaza and wind its way through Downtown Brooklyn and Fort Greene, visiting each installation and culminating at the home where Wright wrote his famous novel Native Son. The tour will explore Wright’s life in Brooklyn and the story behind this public art project; it will also include a reading of his poems at the site of one of the installations.

Kimiko Hahn is the author of ten books of poems, including: Foreign Bodies (W. W. Norton, 2020); Brain Fever (2014), and Toxic Flora (2010), and The Narrow Road to the Interior (2006). Her honor​s​ include a Guggenheim Fellowship, ​the ​PEN/Voelcker Award, ​the ​Shelley Memorial Prize, a Lila Wallace-Reader’s Digest Writers’ Award as well as fellowships from the National Endowment for the Arts and the N​Y​ Foundation for the Arts. She has taught in graduate programs at the University of Houston and New York University, and is a distinguished professor in the MFA Program in Creative Writing & Literary Translation at Queens College, The City University of New York​.​

Matt Brogan is the Executive Director of the Poetry Society of America. He has previously served as Executive Director of Seattle Arts & Lectures and Program Director of the Academy of American Poets and Nextbook. His poems and fiction have appeared in the Antioch Review, Brooklyn Rail, Columbia, Court Green, Denver Quarterly, The Rumpus, Verse, and other literary magazines. He is the editor of This Place (Hatje Cantz, 2019).

THIS IS AN OFFICIAL 2021 BROOKLYN BOOK FESTIVAL BOOKEND EVENT.