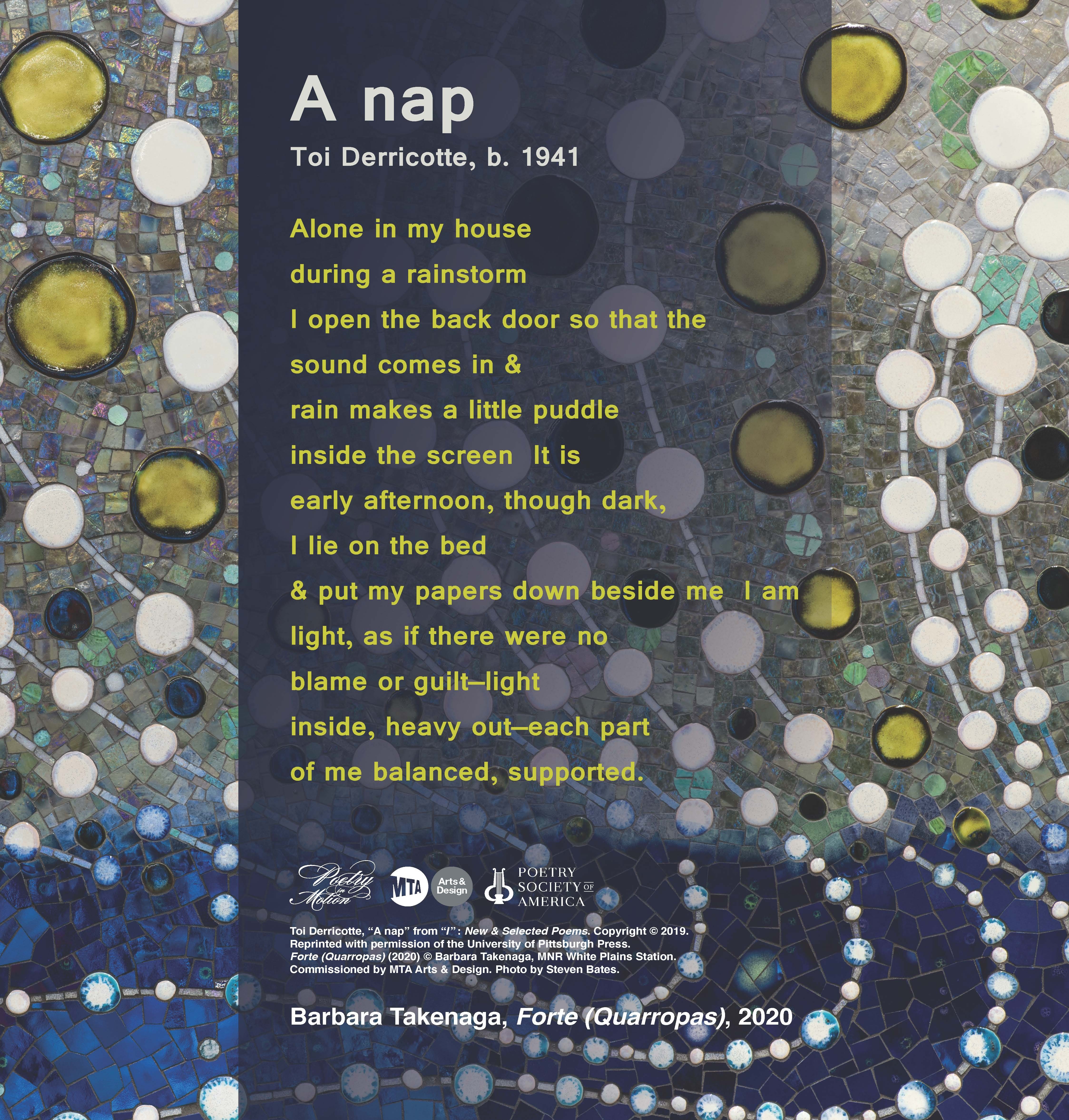 About Poetry In Motion

Poetry in Motion was launched by MTA New York City Transit and the Poetry Society of America in 1992.

The first four poems to appear were an excerpt from "Crossing Brooklyn Ferry" by Walt Whitman, "Hope is the Thing with Feathers" by Emily Dickinson, "When You Are Old" by William Butler Yeats, and "Let There Be New Flowering" by Lucille Clifton.

For the first nine years of the program’s existence, the poems appeared on overhead "car cards" under a specially designed masthead featuring historic station mosaic from a number of subway stations. To celebrate the tenth anniversary in 2002, a new masthead was introduced with elements from "Una Raza, Un Mundo, Universo" (One Race, One World, One Universe), an MTA-commissioned mosaic mural by the artist Jose Ortega at the 149th Street subway station on the 2 and 5 lines.

By 2002, Poetry in Motion had displayed more than 150 poems or excerpts by writers from around the world spanning 25 centuries, from the Chinese poet Lao Tzu to the contemporary Russian poet Vera Pavlova. In 2008, Poetry in Motion was replaced temporarily by Train of Thought, a program of prose excerpts. By then it had presented more than 200 poems nonstop across the MTA's 5000-square-mile travel region.

Poetry in Motion was reborn in March 2012 under the auspices of MTA Arts & Design, once again in collaboration with the Poetry Society of America. The revived program appears on larger "premium square" car cards under a new logo. Working with MTA’s chief designer, the poems are presented with details from artwork that has been installed throughout the MTA system, creating synergy between the disciplines.

The inaugural poster in the new series, which rolled out across the transit system on May 27, 2010, combined art from "The Flora of Bensonhurst," by Joan Linder, installed at the 71st subway station in Brooklyn, with the poem "Graduation," by Dorothea Tanning, an American poet, writer, and visual artist who died at the age of 101, in January 2012, at her home in Manhattan. The program selects and displays two poems each quarter, eight per year, on New York City Transit subways.

Poetry in Motion® is a registered trademark of MTA New York City Transit and the Poetry Society of America.

What is Poetry in Motion?

Poetry in Motion® is a public arts program that places poetry in transit systems of cities throughout the country.

When did Poetry in Motion begin?

Can I purchase a copy of a poster?

The Poetry Society of America does not sell Poetry in Motion posters. The best place to locate previous poems would be in one of the three anthologies.

The Best of Poetry in Motion: Celebrating Twenty-Five Years on Subways and Buses, published by W. W. Norton (2017).

Poetry In Motion® From Coast To Coast published by W. W. Norton (2002) and includes 120 poems from subways and buses across the country.

Poetry In Motion®: 100 Poems from the Buses and Subways was published by W. W. Norton (1996) and was selected as a Best Book for Young Adults by the Young Adult Library Services Association and the American Library Association.

Who selects the poems for Poetry in Motion?

The Poetry Society of America works closely to select poems with representatives from the local transit authorities in the cities where the program appears. In New York City we work with MTA Arts & Design.

How do I submit poems to Poetry in Motion?

The Poetry in Motion® program has generated several publications which are available in bookstores across the country.