The Bond of Live Things Everywhere 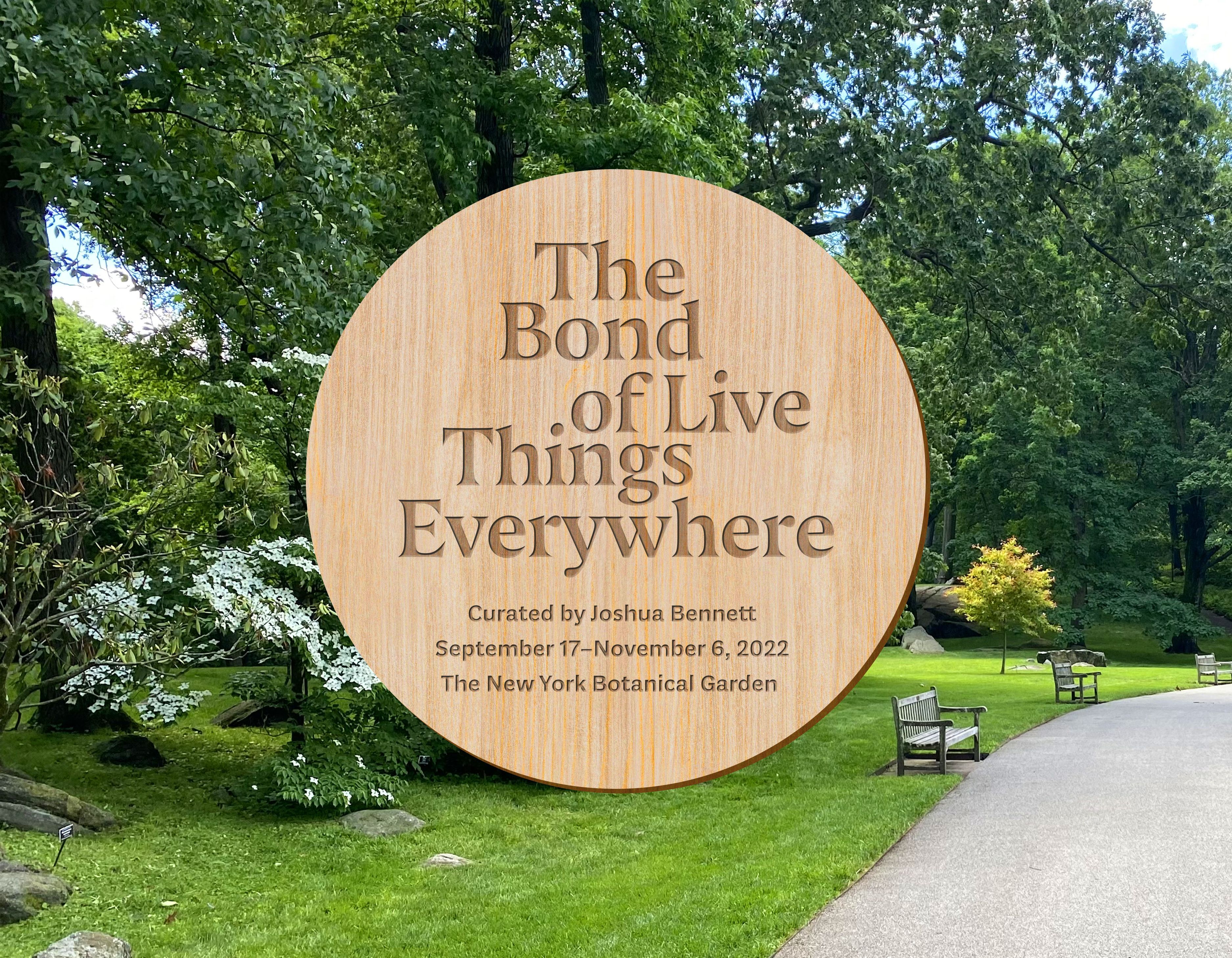 The Bond of Live Things Everywhere stages Black poetry and performance in the open air.

Curated by poet and scholar Joshua Bennett, The Bond of Live Things Everywhere stages Black poetry and performance in the open air, in close proximity to the water and the trees, as well as the live things that evade such proper names.

Inspired in part by “The Clearing”—a green space cut deep in the woods where a free Black community finds grace in Toni Morrison’s Beloved—this installation explores the bond between Black freedom dreams and stewardship of the Earth. We share this combination of poetry and music in pursuit of a collective vision, an electric conviviality, rooted in the Black environmental imagination.

This is a call to The Clearing. An invitation to encounter the planet we call home on new, and more liberating, terms.

Twelve poems will be installed along the Mitsubishi Wetland Trail, accompanied by an immersive soundscape featuring audio recordings of the poems and music by Black performing artists.

Poems featured in the exhibition:

"cutting greens" by Lucille Clifton
"generations" by Lucille Clifton
"Language" by Camille T. Dungy
"Thank You" By Ross Gay
"Winter Poem" by Nikki Giovanni
"Elegy" by Aracelis Girmay
"Greenness" by Angelina Weld Grimké
"Frederick Douglass" by Robert Hayden
"American Sonnet for My Past and Future Assassin" by Terrance Hayes
"After the Winter" by Claude McKay
"Fearless" by Tim Seibles
"#559" by Richard Wright

Listen to the Poems

Joshua Bennett is a Professor of English and Creative Writing at Dartmouth College. He is the author of The Sobbing School (Penguin, 2016)—which was a National Poetry Series winner and a finalist for an NAACP Image Award—as well as Being Property Once Myself: Blackness and the End of Man (Harvard University Press, 2020), Owed (Penguin, 2020), and The Study of Human Life (Penguin, 2022).

Morcos Key is a Brooklyn-based design studio collaborating with arts and cultural institutions, nonprofits, and commercial enterprises in North America and the Middle East. They translate their clients’ stories into visual systems that demonstrate how thoughtful conversation and formal expression make for impactful design.

Lucille Clifton (1936 - 2010) was an award-winning poet, fiction writer, and author of children’s books. Her poetry collection, Blessing the Boats: New & Selected Poems 1988-2000 (BOA, 2000), won the National Book Award for Poetry. In 1988 she became the only author to have two collections selected in the same year as finalists for the Pulitzer Prize, Good Woman: Poems and a Memoir (BOA, 1987), and Next: New Poems (BOA, 1987). In 1996, her collection The Terrible Stories (BOA, 1996) was a finalist for the National Book Award. Among her many other awards and accolades are the Ruth Lilly Poetry Prize and the Frost Medal. In 2013, her posthumously published collection The Collected Poems of Lucille Clifton 1965-2010 (BOA, 2012) was awarded the Hurston/Wright Legacy Award for Poetry.

Camille T. Dungy’s debut collection of personal essays is Guidebook to Relative Strangers (W. W. Norton, 2017), a finalist for the National Book Critics Circle Award. She is also the author of four collections of poetry, most recently Trophic Cascade (Wesleyan, 2017), winner of the Colorado Book Award. She was awarded a Guggenheim Fellowship in 2019. She edited Black Nature: Four Centuries of African American Nature Poetry (UGA, 2009), co-edited the From the Fishouse poetry anthology (Persea, 2009), and served as assistant editor on Gathering Ground: Celebrating Cave Canem’s First Decade (University of Michigan Press, 2006). Her honors include two Northern California Book Awards, a California Book Award silver medal, two NAACP Image Award nominations, two Hurston/Wright Legacy Award nominations, fellowships from the Sustainable Arts Foundation, and fellowships from the NEA in both poetry and prose. Dungy is currently a Professor in the English Department at Colorado State University. She lives in Fort Collins, CO with her husband and child.

Ross Gay is the author of four books of poetry: Against Which (CavanKerry, 2006); Bringing the Shovel Down; Be Holding (Univ. of Pittsburgh, 2020), winner of the PEN American Literary Jean Stein Award; and Catalog of Unabashed Gratitude (Univ. of Pittsburgh, 2015), winner of the 2015 National Book Critics Circle Award and the 2016 Kingsley Tufts Poetry Award. His first collection of essays, The Book of Delights (Algonquin, 2019), was a New York Times bestseller. His new collection of essays, Inciting Joy, will be released by Algonquin in October of 2022.

Angelina Weld Grimké (1880-1958) was a poet, playwright, and journalist. Her play Rachel, written in response to the film The Birth of a Nation, was the first play by a Black woman produced in the United States; the play, which focuses on a lynching, was performed by an all-Black cast in New York and Washington, DC. Her poems and essays appeared frequently in The Crisis, the newspaper of the NAACP, as well as in important anthologies of the Harlem Renaissance, such as The New Negro and Caroling Dusk.

Nikki Giovanni, poet, activist, mother, and professor, is a seven-time NAACP Image Award winner and the first recipient of the Rosa Parks Woman of Courage Award, and holds the Langston Hughes Medal for Outstanding Poetry, among many other honors. The author of twenty-eight books and a Grammy nominee for The Nikki Giovanni Poetry Collection, she is the University Distinguished Professor of English at Virginia Tech in Blacksburg, Virginia.

Aracelis Girmay is the author of three books of poems: the black maria (BOA, 2016); Teeth (Curbstone Press, 2007), winner of the GLCA New Writers Award; and Kingdom Animalia (BOA, 2011), winner of the 2011 Isabella Gardner Poetry Award and a finalist for the National Book Critics Circle Award and the Hurston/Wright Legacy Award. She has received grants, training, and fellowships in support of her work from the NEA, the Whiting Foundation, Civitella Ranieri, the Cave Canem Foundation, and the Community~Word Project, among other programs. She is the editor of How to Carry Water: Selected Poems of Lucille Clifton (BOA, 2020) and is on the editorial board of the African Poetry Book Fund.

Robert Hayden (1913-1980) served as Consultant in Poetry to the Library of Congress (a role now known as Poet Laureate of the United States) from 1976 to 1978. He was the first Black poet to be appointed to the position. His nine collections of poetry include The Lion and the Archer, Words in the Mourning Time, and Selected Poems. Among other awards, he received the Academy of American Poets Fellowship in 1975.

Claude McKay (1890-1948) was a pioneer of Black modernism and an important figure in the Harlem Renaissance. Born in Jamaica, McKay moved to New York City in 1914. His many books include the poetry collections Harlem Shadows and Songs of Jamaica, the novels Banjo, Home to Harlem, and Banana Bottom, and the non-fiction works A Long Way from Home and Harlem: Negro Metropolis. In 1977, the government of Jamaica named Claude McKay the national poet and posthumously awarded him the Order of Jamaica for his contributions to literature.

Tim Seibles is the author of several poetry collections, including One Turn Around the Sun (Etruscan Press, 2017); Fast Animal (Etruscan Press, 2012), a finalist for the 2012 National Book Award; Buffalo Head Solos (Cleveland State University Press, 2004); and Body Moves (Corona Press, 1988). He has received the Open Voice Award, the PEN Oakland/Josephine Miles Literary Award, and fellowships from the National Endowment for the Arts and the Fine Arts Work Center in Provincetown. Seibles has served as a professor at Old Dominion University for over twenty years. He lives in Virginia, where he has served as the Poet Laureate.

Richard Wright (1908-1960) was born on Rucker’s Plantation, near Roxie, Mississippi, in 1908. In 1940, he published Native Son, the first book by a Black author to be selected as the Main Selection of the Book-of-the-Month Club. His later books include his memoir Black Boy and the novels The Outsider and The Long Dream. While he had written poems throughout his career, Wright devoted the final two years before his death in 1960 to the study of haiku and ultimately wrote more than 4,000 of these 17-syllable poems.

The Poetry Society of America gratefully recognizes the following supporters for making this project possible: The Destina Foundation, The David Rockefeller Fund, and Humanities New York. Additional support provided by The New York City Department of Cultural Affairs, The National Endowment for the Arts, and The New York State Council on the Arts.

NYBG is proud to partner with the Poetry Society of America to present The Bond of Live Things Everywhere, which is supported by: