About Us > News > BY POPULAR DEMAND 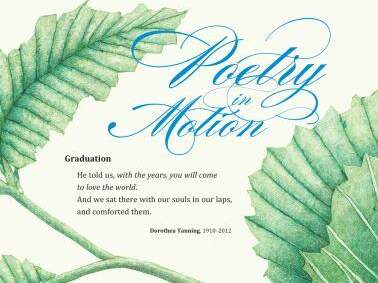 "Back by popular demand" are the first words of the Metropolitan Transportation Authority's press release about the relaunch of our joint—and immensely beloved—Poetry in Motion Program in the subway cars of New York City. (You can read all about the ceremony at Grand Central Terminal and the marvelous expansion of the program in the news articles referenced in our website section "Just in now.")

I'd like to say a few words about the choice of the poem, Dorothea Tanning's "Graduation." It's perfect timing for the appearance of this poem in the subways (25% of the entire fleet) and on the backs of a large number of select Metrocards (three million to be precise) as so many all over the city will be graduating from one place or another all through May and June when the poem is up, a moment of embarkation Tanning's poem deftly enshrines. I think the poem also reflects Tanning's wistfulness about beginnings—in her case, her childhood and girlhood in Galesburg, Illinois, a place where (as she wrote in her entrancing memoir, Between Lives) "you sat on the davenport and waited to grow up."

Only that wasn't Dorothea and if you obtain the memoir, you'll learn how not so it is in her case!

The poem is ensconced in a beautiful piece of art entitled "The Flora of Bensonhurst," by Joan Linder, a newly installed (but
not yet unveiled) laminated glass artwork at the 71st Street station on the D line in Brooklyn. Tess O'Loughlin, a designer at the MTA, has created a dynamic new logo, all brilliantly demonstrating the template for the new program, which pairs poems with artwork commissioned by the MTA's Arts For Transit and Urban Design under the leadership of Sandra Bloodworth and Amy Hausmann.

Dorothea became a poet in her late 80s, encouraged by James Merrill. She published her first collection, A Table of Content, with Graywolf Press when she was 94 and her second, Coming to That, this past September, a month after her 101st birthday and just a few months before she died on January 31, 2012.

Now everyone in New York who rides the subway on a regular basis will have access to Dorothea Tanning's spirit, one of the most vital and delightful I have ever encountered.

2 Comments for BY POPULAR DEMAND

I write on behalf of my 9 and a half old daughter, Ioana Emina Pitici. She has recently come up with several poems in a burst of inspiration, and I am wondering if, considered appropriate, you would post her poems online or in the New York City's buses or subway.

Please let me know how to communicate with you on this matter. I look forward to hearing from you.

Below, please find one of her favourite, which, thinking of myself, I would love to see in a bus or subway in New York City, or posted on a public site.

If day were night
by Ioana Emina

If day were night
you’d make it bright.
Like a blazing star of fiery wisdom,
an ever living joy.

In my early 60’s now and entering the third chapter of my life, I see everyday things … those I had previously taken for granted … in a much different and positive light. As the author Judith Guest so eloquently describes the “Blessed Life”, I have found myself looking beyond the trials and tribulations, disappointments and regrets, and have now focused on events and facts from life that depict the Blessed Life that I have been fortunate enough to experience. With that in mind, I found this piece from Dorothea Tanning to be so incredibly inspirational as I read it on the Times Square shuttle this rainy Wednesday morning, that it brought tears to my eyes. Tears not of sadness, but of divine gratitude to have experienced a similar measure of profound pride and achievement in my life.