About Us > News > Celebrating a Literary Keystone: A Tribute to Daniel Halpern

Celebrating a Literary Keystone: A Tribute to Daniel Halpern 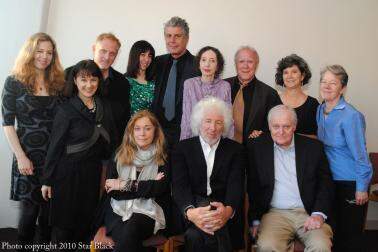 Last night, the Poetry Society of America joined forces with the Academy of American poets and NYU's Creative Writing Program to honor Daniel Halpern on the occasion of the fortieth anniversary of the Ecco Press.

Last Thursday May 6th, the Poetry Society of America joined forces with the Academy of American poets and NYU's Creative Writing Program to honor Daniel Halpern on the occasion of the fortieth anniversary of the Ecco Press.

John Ashbery, Anthony Bourdain, Janie Fink, Richard Ford, Jorie Graham, Bob Hass, Campbell McGrath, and Joyce Carol Oates came together in a sweetly conspiratorial spirit to read favorite poems by Dan and to pay tribute to the spectacularly influential editor and publisher, and the audience of 400 or so appreciated every word.

For many of us, it was a chance to revisit the glory days of the literary journal, Antaeus (1970-1994), founded by Dan and Paul Bowles a year before he brought Ecco Press into being.

Antaeus. Antaeus, Antaeus—it was such a central part of our literary lives for so many years, allowing us to feel in the knowand connected to the great writing of our moment, a moment in which—in no small part because of Dan and his editorial acumen and dedication—poets and writers were held aloft in equal terms and in the same universe.

In Antaeus, we found—alongside the work of those featured in the program—new writing by (and this is a truly abbreviated sampling):

And there were also enchanting reading lists, "Neglected Books of the 20th century," to live and to grow by.

Daniel Halpern: here was an editor on the qui vive and ahead of the curve—great and wide taste, energy, focus, pluck, and the necessary worldliness to make it all a huge Go.

We all recall the covers of Antaeus—glowing yellow, dazzling pink, lilac, sky blue—as well as the beautiful design and typography, the table of contents each quarter delivering news of what Dan had discovered here and abroad. What achievement! And the freshness and importance of Antaeus flowed so seamlessly into Ecco Press, where Dan publishes marvelous writers with great élan on a yearly basis.

In all that Daniel Halpern has done and continues to do, so many of us trace major adventures in our reading lives. We were all deeply glad to celebrate him as poet, teacher, editor, publisher, and one of the great literary entrepreneurs our country has known.