About Us > News > Dante Micheaux wins the Four Quartets Prize 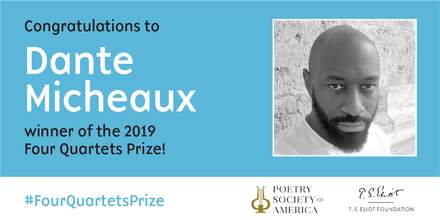 The T. S. Eliot Foundation and the Poetry Society of America are pleased to announce the winner of the Four Quartets Prize, Dante Micheaux, for his book Circus. The purse is $20,000. He was selected by judges Rowan Ricardo Phillips, Carmen Giménez Smith, and Rosanna Warren.

The T. S. Eliot Foundation and the Poetry Society of America are pleased to announce the winner of the Four Quartets Prize, Dante Micheaux, for his book Circus. The purse is $20,000. He was selected by judges Rowan Ricardo Phillips, Carmen Giménez Smith, and Rosanna Warren.

Dante Micheaux is the author of Circus (Indolent Books, 2018) and Amorous Shepherd (Sheep Meadow Press, 2010). He holds a Master of Fine Arts in Creative Writing from New York University. His poems and translations have appeared in The American Poetry Review, Callaloo, Poetry, PN Review, and Tongue, among other journals and anthologies. Micheaux's honors include a prize in poetry from the Vera List Center for Art & Politics, the Oscar Wilde Award, and fellowships from Cave Canem Foundation and The New York Times Foundation.

Finalist for the 2019 Four Quartets Prize were:

Clare Reihill of the T.S. Eliot Foundation in London writes: "We warmly congratulate Dante Micheaux, this year's winner, for his brilliant achievement. T. S. Eliot was the master of the long poem. His position in 20th century poetry was built on the two most important long poems of his generation: The Waste Land and Four Quartets (with the latter hailed as his crowning achievement). Before this prize came into being, the form had no distinct prize in its honour."

"We were so thrilled by Danez Smith's win last year and the standard has continued to be startlingly high with this year's shortlist. On behalf of the T. S. Eliot Estate I wish each poet our warmest congratulations on being shortlisted. Their exceptional writing is making a huge contribution to sustaining this poetic form."

The Four Quartets Prize—which was launched last year on the 75th anniversary of the publication of Four Quartets in a single volume, in America, in 1943—is first and foremost a celebration of the multi-part poem, and is awarded to a unified and complete sequence of poems published in America in a print or online journal, chapbook, or book in 2018.

The Poetry Society of America, the nation's oldest poetry organization, was founded in 1910. Its mission is to build a larger and more diverse audience for poetry, to encourage a deeper appreciation of the vitality and breadth of poetry in the cultural conversation, to support poets through an array of programs and awards, and to place poetry at the crossroads of American life.