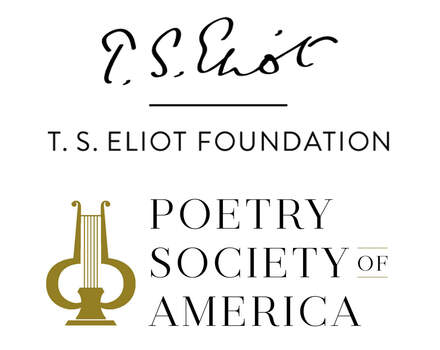 The T. S. Eliot Foundation and the Poetry Society of America are pleased to announce the three finalists for the Four Quartets Prize, which is to be awarded to a unified and complete sequence of poems published in America in a print or online journal, chapbook, or book in 2018.

The T. S. Eliot Foundation and the Poetry Society of America are pleased to announce the three finalists for the Four Quartets Prize, which is to be awarded to a unified and complete sequence of poems published in America in a print or online journal, chapbook, or book in 2018.

The prize—which was launched last year on the 75th anniversary of the publication of Four Quartets in a single volume, in America, in 1943—is first and foremost a celebration of the multi-part poem, which includes entire volumes composed of a unified sequence as well as novels in verse and book-length verse narratives.

The finalists for the 2019 Four Quartets Prize are:

On behalf of the judging panel, Rowan Ricardo Phillips says, "The three finalists for the 2019 Four Quartets Prize represent how the long poem continues to delight, attract, and sustain readers and fellow poets alike into the twenty-first century. These poems are daring, expertly crafted, alluring, and infused with a sense of poetic purpose. They rose to the top of an incredibly competitive field of submissions. And that the finalist list comprises three different modes of the long poem—the book-length poem, the extended lyric passage, and the chapbook—speaks to the vital diversity of the form; for they suggest, rather emphatically, that the American long poem sequence is in good health and in good hands today and going forward into the future. We loved the chance to talk about this extraordinary gathering of poems."

Alice Quinn, Executive Director of the Poetry Society of America says, "The recent proliferation of chapbook publication in America and of journal publication of sequences of poems has fostered an extraordinary climate for this prize, which is becoming a beacon, holding out hope of significant recognition and reward for achievement in this area of poetic endeavor. We are so grateful to Clare Reihill and all at the T.S.Eliot Foundation for their vision in recognizing and fostering this brilliant work."

The winner will be announced at a private luncheon at the National Arts Club on April 30, 2019.

Catherine Barnett is the author of three collections, Human Hours (winner of the 2018 Believer Book Award in Poetry and a New York Times "Best Poetry of 2018" selection), The Game of Boxes (James Laughlin Award of the Academy of American Poets), and Into Perfect Spheres Such Holes Are Pierced (Beatrice Hawley Award). Her other honors include a Whiting Award and a Guggenheim Fellowship. She teaches graduate and undergraduate students in the Creative Writing Program at NYU, is a Distinguished Lecturer at Hunter College, and lives in New York City, where she also works as an independent editor.

Dante Micheaux is the author of Circus (Indolent Books, 2018) and Amorous Shepherd (Sheep Meadow Press, 2010). He holds a Master of Fine Arts in Creative Writing from New York University. His poems and translations have appeared in The American Poetry Review, Callaloo, Poetry, PN Review, and Tongue—among other journals and anthologies. Micheaux's honors include a prize in poetry from the Vera List Center for Art & Politics, the Oscar Wilde Award and fellowships from Cave Canem Foundation and The New York Times Foundation.