About Us > News > John Murillo wins the 2021 Four Quartets Prize 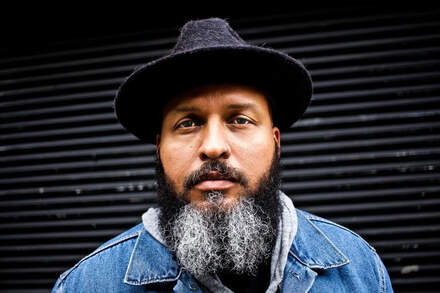 The T. S. Eliot Foundation and the Poetry Society of America are pleased to announce that John Murillo is the winner of the 2021 Four Quartets Prize for his poem “A Refusal to Mourn the Deaths, by Gunfire, of Three Men in Brooklyn” from his collection Kontemporary Amerikan Poetry (Four Way Books, 2020).

He was selected by judges Carolyn Forché, Donika Kelly, and Arthur Sze.

The Four Quartets Prize—which was launched in 2018 on the 75th anniversary of the publication of  T. S. Eliot's Four Quartets in a single volume, in America, in 1943—is first and foremost a celebration of the multi-part poem, and is awarded to a unified and complete sequence of poems published in America in a print or online journal, chapbook, or book in 2020.

John Murillo is the author of the poetry collections Up Jump the Boogie (Cypher 2010, Four Way Books, 2020), finalist for both the Kate Tufts Discovery Award and the Pen Open Book Award, and Kontemporary Amerikan Poetry (Four Way Books, 2020), winner of the Kingsley Tufts Award and Poetry Society of Virginia North American Book Award and finalist for the NAACP Image Award and PEN/Voelcker Award. His honors include two Larry Neal Writers Awards, a pair of Pushcart Prizes, the J Howard and Barbara MJ Wood Prize from the Poetry Foundation, and fellowships from the National Endowment for the Arts, the Bread Loaf Writers Conference, Fine Arts Work Center in Provincetown, Cave Canem Foundation, and the Wisconsin Institute for Creative Writing. He is an assistant professor of English and director of the creative writing program at Wesleyan University and also teaches in the low residency MFA program at Sierra Nevada University. He lives in Brooklyn.

The Judges’ Citation: John Murillo's "A Refusal to Mourn the Deaths, by Gunfire, of Three Men in Brooklyn" lights a match and holds us in the flame. In this extraordinary fifteen-sonnet redoublé, the speaker meditates on the recent history of murderous racism in America that makes of Black men targets, and centers in the lyric space Black anger and Black pain. Murillo reminds us that his is a long lineage and each sonnet’s epigraph marks the genealogy of resistance Black poets continue to enact. Murillo’s anti-elegy demonstrates a lyrical virtuosity, passion, and command of language that makes this work urgent, essential, and enduring.

Srikanth Reddy's latest book of poetry, Underworld Lit (Wave Books, 2020), is a finalist for the Griffin International Poetry Prize, longlisted for the Believer Book Award, and a Times Literary Supplement "Book of the Year" for 2020. He is also the author of Voyager (Univ. of CA Press, 2011), named one of the best books of poetry in 2011 by The New Yorker, The Believer, and National Public Radio; and his first collection, Facts for Visitors (2004), won the 2005 Asian American Literary Award for Poetry. The recipient of fellowships from the Guggenheim Foundation, the Creative Capital Foundation, and the National Endowment for the Arts, he is currently Professor of English and Creative Writing at the University of Chicago.

The Poetry Society of America, the nation’s oldest poetry organization, was founded in 1910. The PSA’s mission is to place poetry at the crossroads of American life. The PSA transforms public spaces into sites for imaginative encounters with poems, engages diverse and often underserved communities, amplifies the voices of poets around issues of common concern, and honors their aesthetic contributions to our lives.