About Us > News > “Liquidity of Emotion”: Rob Wynne “Activates” the Americas Collection at the Brooklyn Museum

“Liquidity of Emotion”: Rob Wynne “Activates” the Americas Collection at the Brooklyn Museum 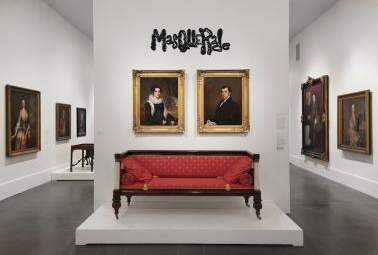 Rob Wynne is an artist of conviction, steadfast in his assertion that his latest installation—an "activation" with the American Art collection on the fifth floor of the Brooklyn Museum—be called FLOAT.

Rob Wynne is an artist of conviction, steadfast in his assertion that his latest installation—an "activation" with the American Art collection on the fifth floor of the Brooklyn Museum—be called FLOAT.

The first piece that greets visitors is a circular swirl of light, comprised of 1100 glass dots. EXTRA LIFE takes up an entire wall, framing a group of 19th c. neoclassical marble sculptures such as Randolph Roger's Nydia, in which the young blind woman attempts to leave Pompeii, using her exceptional hearing and her walking stick. Wynne's exhibition also represents a different way of seeing.

Co-curated by Jennifer Y. Chi and Margarita Karasoulas and on view until March 3, 2019, "Rob Wynne: FLOAT" is a large-scale installation of hand-poured glass formed into texts that provide thought-provoking commentary on the walls of the permanent collection. Although their placement might seem haphazard, upon closer observation they represent deliberate and meaningful interactions with the works of art. While only some of the glass is fully reflective, all of the pieces act as mirrors for the viewing public to experience a new perspective. I recently viewed the exhibition with Wynne, and he discussed the intention behind many of these (sometimes cryptic) "activations."

A painter by training, Wynne demonstrates his versatility as an artist throughout his exhibition, which includes not only glass pieces but also a piece created using pigment and embroidery on canvas, as well as a small gold sculpture.

Wynne's journey with glass happened purely by chance. While meeting with technicians at a glass foundry for a project inspired by the Italian opera The Sleepwalker (La sonnambula), he was handed a heavy, hot ladle—which he promptly dropped, splattering bright orange molten glass onto the dirty floor. Enraptured by the sight and already interested in language and text, he wanted to know if it would be possible to make glass letters. He chose to eschew a mold, prioritizing the handmade over the industrial, carefully pouring out letters to the best of his ability. The result is very legible letters that are organic rather than rigid, showcasing their material.

In MASQUERADE, Wynne questions the inherent artificiality of posing for a portrait. How do we present ourselves to the world? He has placed dark letters above two portraits by Samuel Lovett Waldo, painted from 1820 to 1825. Looking into a nearby mirror situated above a pier table fashioned by Charles-Honoré Lannuier, one can see the word Masquerade reflected back at oneself. The surface of the mirror is concave, distorting the reflections, which feels particularly appropriate in this context.

Continuing on this theme, I SAW MYSELF SEE MYSELF feels like one of the most personal pieces of Wynne's, placed above an Art Deco vanity complete with mirror and drawing its title from Beatrice Woods' autobiography.

The influence of poetry and literature on FLOAT should not be overlooked. Wynne drew from poetry for ALL THE WORLDLY POSSESSIONS OF THE PIED PIPER, a reference to the legendary Robert Browning poem. He had already crafted the piece when he came across Janet Scudder's Seated Faun, a bronze sculpture depicting a half-goat, half-human figure playing two single pipes. Wynne, who had never heard of Scudder, thought the sculpture was fascinating and felt a chill on his neck. Wynne thinks it's wonderful that this gallery features many lesser-known artists, including indigenous and women artists.

Wynne's exhibition privileges the careful observer, and one of the most surprising additions is a small gold sculpture of a snake that fits right in with the rest of its neighboring Pre-Columbian gold artifacts. If one were not looking for Wynne's work, one would think it was part of the permanent collection. No pieces from the permanent collection were moved to accommodate Wynne, so all of his pieces interact with the collection in an authentic way.

One of the highlights of the American collection is the final version of Hiram Powers' The Greek Slave, completed in 1866 and scandalous and groundbreaking at the time for its depiction of the nude female form. In the shadow of the shackled woman, silvery drops of glass almost pop off the wall. For Wynne, DROPSrepresents the "liquidity of emotion seeping through the walls." As if to bring this point home, diagonally across from this sculpture is Robert Weir's 1857 painting Embarkation of the Pilgrims, which "documents a tearful group of English Puritans…."

Ultimately, Wynne's thought-provoking work complements, rather than overtakes, the permanent collection. In this case, the glass punctuation mark draws the viewer's attention to the abhorrent treatment of Native Americans by European colonizers hell-bent on fulfilling Manifest Destiny.

Acutely aware of the diversity of voices and histories contained within the gallery walls, Wynne strives to inspire viewers to examine the artworks with fresh eyes. People say, "seeing is believing. But I say believing is seeing," says Wynne. "If you pause or float, you give yourself the opportunity to consider or reconsider."