About Us > News > Locating the Sacred 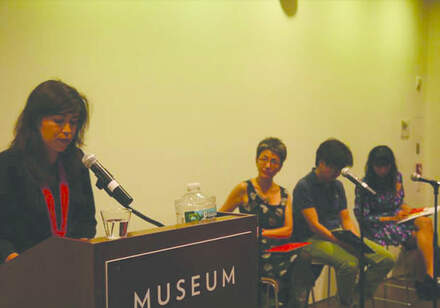 In celebration of its thirtieth birthday, and of the community it has so tirelessly built over the last three decades, the Asian American Arts Alliance (A4) brought the summer to a close with a unique and vibrant festival called Locating the Sacred. The twelve-day festival, which comprised over twenty events in all five boroughs, gathered hundreds of artists and cultural activists together to respond to the simple, yet profound, question, "What is sacred to you?" With the shared vision of strengthening community, these artists and thinkers explored the sacred within Asian and Asian-American art and identity.

The PSA was honored to contribute to the festival. Last Thursday, at the Museum of Chinese in America, we co-sponsored a panel on the sacred in Asian and Asian-American poetry. After museum Director Nancy Bulalacao welcomed the event to MOCA's gorgeous space, poet and scholar of Modernism Roger Sedarat offered a brief, but illuminating, historical context of the long-standing influence of Asian poetics on American poetry of the 20th century. In particular, Sedarat focused on Emerson's and Pound's absorption, appropriation and transfiguration of various Asian cultures and literatures.

Featured poets and panelists Monica Ferrell, Kimiko Hahn, Timothy Liu, and recent PSA-chapbook winner Angela Veronica Wong then spoke of their personal influences from the east, as well as the role the sacred plays in their own lives and work.

After describing the origin of the ghazal in Muslim mystical practices and the adoption of the form in North Indian culture, Monica Ferrell then read an incantatory ghazal by Agha Shahid Ali called "Even the Rain," followed by one of her own, "In the Rain," a reply-poem in conversation with Ali's. Kimiko Hahn discussed her great interest in zuihitsu, a Japanese list poem in which the sacred stands alongside, or emerges from within, the quotidian, and later read from among Sei Shonagon's The Pillow Book, a tenth-century example of the form.

Finally, Timothy Liu and Angela Veronica Wong read, in addition to their own work, poems by contemporary poets: Tan Lin's Heath Course Pak, and Sawako Nakayasu's Texture Notes and Kim Gek Lin Short's China Cowboy, respectively. While Veronica meditated on whether the sacred and the secular could ever be separated in poetry, Timothy Liu proclaimed, in perhaps the most resonant moment of the evening, "If the sacred is a stain-glass window, poetry is the rock we throw through it to let the fresh air in."

We thank our featured poets and panelists, as well as our co-sponsors, A4 and the Museum of Chinese in America, for an inspiring and thought-provoking event.