About Us > News > PSA at the White House: On the 2011 National Medal of Arts and National Humanities Medal Ceremony

PSA at the White House: On the 2011 National Medal of Arts and National Humanities Medal Ceremony 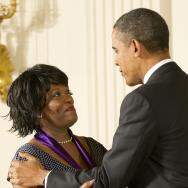 On the heels of announcing an 8 million dollar boost to the 2013 NEA budget and a proposed increase of 5% for arts and culture overall, President Obama honored recipients of the 2011 National Medal of Arts and the 2011 National Humanities Medal with a ceremony yesterday afternoon at the White House. Among the honorees were two poets, Rita Dove, recognized with the National Medal of Arts, and John Ashbery, recognized with the National Humanities Medal.

President Obama acknowledged Dove's service as a poet and former Poet Laureate. Dove was gracious and dignified in her acceptance of the honor. Her poetry continues to be celebrated this season with her Pulitzer prize-winning collection, Thomas and Beulah, being brought to the stage at Queens College in the inaugural installment of our public program, Poets in the Playhouse.

Ashbery, whom Obama remarked, "has profoundly influenced generations of writers and garnered awards spanning the Pulitzer Prize to the Grand Prix de Biennales Internationales de Poésie" was cordial and visibly joyful. Ashbery was most recently featured in The Figure of Orpheus in Poetry and Performance 1910-2010,a PSA centennial celebration.

The President, an avid reader of poetry, quoted Emily Dickinson as he congratulated the artists and scholars for their achievements and offered encouragement to the nation's young student and emerging artists as he said "'I dwell in possibility.' And so does the American spirit. That's who we are as a people."

First Lady Michelle Obama who recently helped launch the National Student Poets program was also present. The Obama administration's championing of poetry and poets continues the ongoing exchange between Washington and the arts across America. One can only hope that the tradition of these medals and the budget increases are the beginning of increased support for the arts outside of D.C. too, as during the recent economic crisis many cities experienced cuts in education and the arts nationwide.