About Us > News > Tribute to Lucille Clifton 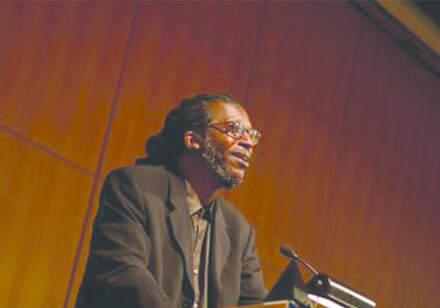 Last night, February 21st, a number of New York's literary organizations, spearheaded by Cave Canem and the Poetry Society of America, came together as a family in Proshansky Auditorium at CUNY, to celebrate Lucille Clifton on the occasion of the posthumous publication of The Collected Poems of Lucille Clifton 1965-2000, an absolutely beautiful volume (with a ribbon!), just published by BOA Editions Ltd.

Last night, February 21st, a number of New York's literary organizations, spearheaded by Cave Canem and the Poetry Society of America, came together as a family in Proshansky Auditorium at CUNY, to celebrate Lucille Clifton on the occasion of the posthumous publication of The Collected Poems of Lucille Clifton 1965-2000, an absolutely beautiful volume (with a ribbon!), just published by BOA Editions Ltd.

A friend of mine who hadn't known her poetry was in attendance and wrote to me this morning, "It was warm, it was funny, it was moving, it was inclusive. The poems are so personal and consoling, really—her spirit was everywhere."

Her spirit was evident in the ebullience felt by all who read her poems on stage last night and one who sang them, the dazzling mezzo soprano Alicia Hall Moran, pictured here in this gallery of images by Sofia Verzbolovskis.

Clifton's spirit is also captured in a beautiful, affecting poem by Toi Derricotte, which had its origin in the story of Toi's making her way to the celebration of Clifton last August and which Toi has graciously given us permission to reprint below.

Lucille Clifton was the PSA's 2010 Frost Medalist. In his afterword to the new omnibus volume of her poems, which he co-edited with Michael S. Glaser, Kevin Young writes "the last words in the 2010 daybook are the start to the acceptance speech Clifton began for the Frost Medal she was to be awarded by the Poetry Society of America in April of that year. While she did not live to give that speech, we still have her spoken, written, near sung voice in lines echoing her most reprinted poem [won't you celebrate with me], 'I stand here before you having survived 3 bouts with cancer, a kidney transplant, the loss of my husband and two of my children and arthritis like you wouldn't believe. Indeed won't you celebrate with me?'"

When I call to change my reservations
so that I can go to Baltimore to honor Lucille,
the woman at US Air
doesn't laugh easy.
I'm trying to communicate—
not only that I have to change
my reservation—but
that I have to change it quick and
for the most important reason!
(Maybe if US Air knows
it's for Lucille, they'll say,
Oh shucks, then just go free!).
I ask: Ever hear of Lucille Clifton?
No. (I am always flabbergasted
by what people don't know about the best
poets—I mean—in the universe!)
I go on and change the reservation,
getting charged the hundred bucks,
and, as she's giving
dates, times, and numbers, we get
acquainted and a little warmer,
so, at the end I say, Want to hear
a poem by her? and she says—
an upsweep in her voice—Sure!
I run down with the phone like there's
a new guest in my house—a real
woman coming to life close
to my mouth and ear—and I find it
alphabetical on the shelf, Good Woman
jumps into my hand, and I open to the first poem
and begin:
in the inner city
or
like we call
it home to this
woman who sounds
tired of making
reservations and the people
who think theirs is most
important.
I say—Want to hear another, and she says
Yes, even happier, that was really
good, and I open to:
i was born with twelve fingers
like my mother and my daughter.
each of us
born wearing strange black gloves which ends
and we connect
my dead mother my live daughter and me
through our terrible shadowy hands
That is wonderful, she says, and now she sounds as close
to me as love, and I say, Lucille doesn't have an easy
life, she has breast cancer, she has to have
dialysis, a kidney transplant, and she lost her daughter
and her son.
If you saw her you'd know
how great, but you'd also see
how real. You'd see she has some special
hook up to the center and all that
energy comes from there.
And the operator says,
I am really moved, and I will, I really will look her
up. My name is Treesy and last week I found out that my
nine year old daughter has cancer, and I want to
get that book and read those poems
to her, she will really
like them. And I said isn't that
wonderful that we talked and that I got
to read you Lucille? After I lost my mother, she told me
When you lose the flesh
you gain more power. And I said it's like that, like
the miracle of meeting you, you
meeting Lucille, and