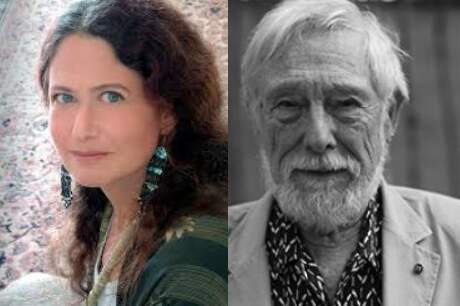 Award-winning poet, essayist, and translator Jane Hirshfield is the author of several collections of verse, including The Beauty (2015), a finalist for the National Book Award; Come, Thief (2011); After (2006); shortlisted for the T.S. Eliot prize; and Given Sugar, Given Salt (2001), a finalist for the National Book Critics Award, among others. Hirshfield has also translated the work of early women poets in collections such as The Ink Dark Moon: Poems by Ono no Komachi and Izumi Shikibu, Women of the Ancient Court of Japan (1990) and Women in Praise of the Sacred: Forty-Three Centuries of Spiritual Poetry by Women (1994). Her many awards include fellowships from the National Endowment for the Arts, the Rockefeller Foundation, and the Guggenheim Foundation. She was elected a chancellor of the Academy of American Poets in 2012.

​Gary Snyder
has published numerous books of poetry and prose, including Danger on Peaks (2005), The Gary Snyder Reader (1999); Mountains and Rivers Without End (1997); No Nature: New and Selected Poems (1993), which was a finalist for the National Book Award; Axe Handles (1983), for which he received an American Book Award; and Turtle Island (1974), which won the Pulitzer Prize for poetry. He has won numerous honors and awards for his writing, including the Bollingen Prize, an American Academy of Arts and Letters award, a Guggenheim Foundation fellowship, the Shelley Memorial Award, and the Ruth Lilly Award. Snyder was elected a Chancellor of The Academy of American Poets in 2003.

Co-presented by the Mill Valley Library, the Marin Poetry Center, and the Poetry Society of America.

Free and open to the public.