Home > Features > In Their Own Words > Kristin Dykstra on “in Beckett’s South-Eastern Railway Terminus,” by Reina María Rodríguez 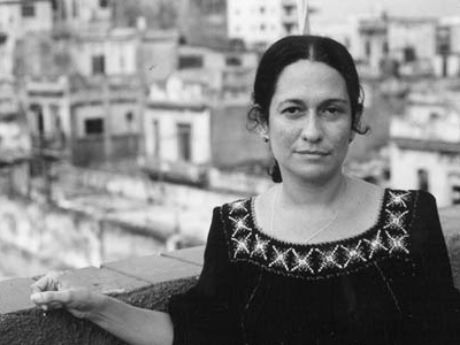 What is the south, el sur? Where does it truly lie? Who inhabits the south? What sort of encounters might you (an actual you, reader) have there?

it will be in the south
having followed long tracks
where we'll meet.
the people who accompany us
don't know, don't want to know
the price of those rose windows
that filter light
intermittently
they drop their heads and walk
around
pretending they don't see the light.

(from "in Beckett's South-Eastern Railway Terminus")

Which people are these, who don't want to know or see? Are they really in the same south?

But Havana's southernness is not inevitable or permanent. Havana is north of Managua and Panama City, north of Cartagena, north of Mérida in the Venezuelan Andes, north of Quito and Lima and La Paz and Santiago and Montevideo and Buenos Aires – definitively north of most of what gets called "Latin America."

Havana lies to the east of modern-day Mexico, which turned out to be a strategically useful location for conquest and trade. By the end of the sixteenth century it was considered "the key to the New World."

Still Reina María Rodríguez's city is part of many souths, potent states of mind. Her Havana is a capital city of Latin America, historically imagined as a southern network of places existing in opposition to an Anglo north. Havana has sometimes affiliated with other souths too, and in the twenty-first century one can ask how its filaments of imagination thread through a "global" south.

Rodríguez won her second prestigious Casa de las Américas award for poetry with the 1998 collection in which this poem appears, La foto del invernadero (The Winter Garden Photograph). Based at her rooftop apartment overlooking a section of Havana, the writer flipped through pages of imagery from other places as she composed the poems. She found prompts principally in photographs and articles from the UNESCO magazine The Courier, as well as another habitual source that gives the Beckett poem its title: literary works by writers from many nations. Her intertextual vision of a south is likely to be unexpected for readers seeking signposts from the much more familiar (all too familiar) political rhetoric that frames Havana in the North American media.

Rodríguez wrote her south as a state of relation to other voices, sights, and places—a moving target. Beckett's own South-Eastern Railway Terminus presents a self and X, a "paradigm of human kind." By contrast to trains, however, Beckett proposes that human motion stalls, and as his narrator tries to locate his essential being in some place and time, he encounters himself always at some distance from anywhere. He declares himself missing.

Rodríguez too defers any exact finding of place or self. Yet she discovers a "we" somewhere out there too, and maybe you are part of it:

we survive
with words subject to another loss
at the end of those tracks
transporting a contemporary head
as a paradigm for humankind.

to be another thing, a style, some filiation
without hearing, without voice, without self
changing class
(in my train car that has neglected
time and place I think through
the breath in you; I think through
the blood in you) and I stroke your
hand in the gloomy daylight of the platforms
sheltering in Beckett's South-Eastern Railway Terminus
at a time halfway to a greater time
blurring near the window
that frames the time of the real.

In The Winter Garden Photograph, Rodríguez showcases a south inside her head. It carries one of the key traits of her city's contemporary poetry scene: a sharp, insightful desire to converse with poetry from around the world.

because the cities we've seen
are not eternal at November's close
(and an observer has a single purpose
in the awareness of his own death:
to view the present tense of things with
intensity) and to move unperceived
toward the place where
one day we'll meet,
there, where life persists
where all life has disappeared
along the tracks.