Rio Cortez on “UFO, For Instance” 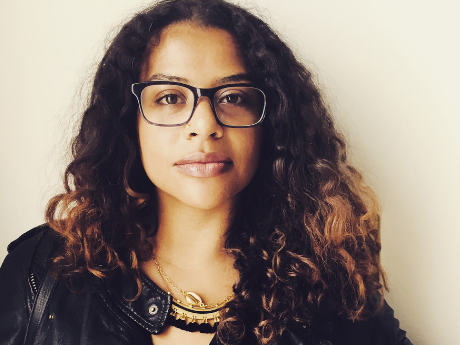 When the hole between blue spruce widens

across its belly         when in the clearing you are certain

where other knowing rises too         & divides from the bone

could anyone know anymore         you might as well look out

orange in branches         you listen for howling but none comes

On "UFO, For Instance"

I was raised in Utah, and had, a white evangelical grandmother. She described herself to anyone as a "born-again Christian." She would host bible study in her home and attended a warehouse-become-church with a rock star pastor who was mic'd up every Sunday to an enormous congregation of second-chancers. The church had a gift shop with unsubtle religious t-shirts. She once gave me a shirt that I wore to my 5th grade class picture day, depicting an illustration of Jesus Christ hanging from the cross with bloody lashes across his back, beneath the image it read "Read between the lines."

All that to say that there was a time before my grandmother was born-again. She was a mountain woman. Catching her in the right mood, she would retell a story about something she saw driving home from a hunting trip in the Book Cliff Mountains with my grandfather. They were descending the canyon at dusk on an unpaved road when they both came upon a saucer-shaped vehicle with round lights all the way around. They stop. My grandfather turns off his high beams. The strange vehicle turns off its high beams. My grandfather turns the headlights back on, the strange vehicle turns on its lights. With total awe, exactly awe, my grandfather stops his engine and he and my grandmother step out of the truck and into the meadow. As soon as they do, the strange vehicle disappears completely. They start to drive back down the canyon and encounter another traveler. They say to this man "tell me you saw what we saw," and he had.

My grandmother would retell this story to trusted audiences and what I loved most about it, was that it was at some odds with her beliefs. It was a knowing that she had experienced, a certainty, matched never quite by the rehearsals of her religion. I wrote this poem thinking about knowing that sometimes comes to us, mysteriously, and without explanation. Not quite intuition. Knowing that is capable of derailing us, or isolating us, spiritually. And then what it might look like to explain that unseeable truth.


Rio Cortez contributed this piece in conjunction with LA BENDICIÓN: A ONE-DAY CELEBRATION OF LATINX-CARIBBEAN POETRY IN THE UNITED STATES at New York University on February 8th, 2018.